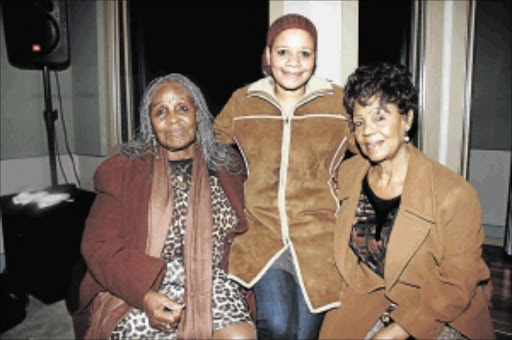 This is the day in 2008 when Makeba's body was flown from Italy back to her homeland after she collapsed and died four days earlier while she was performing.

The day Makeba's body was repatriated was also Makeba's great-grandson Lindelani's birthday. He was aged 13.

Speaking in the company of two legendary soul singers, Dorothy Masuku and Abigail Kubeka, the mood is sombre.

They are taking time off their tight rehearsal schedule, preparing for Makeba's tribute concert tonight at the Birchwood Hotel in Boksburg.

Lee said it was an honour to share the stage with her grandmother's friends, Masuku and Kubeka.

"When I see them I see my grandmother as well.

"It's a tribute every day. Actually today is the day she arrived from Italy before her memorial service and also her first great-grandson's [Lindelani] birthday."

Masuku and Kubeka were Makeba's bosom friends since childhood.

Kubeka says she pays tribute to her friend everyday.

"We sing songs that she sang. And there are songs we sang with her. She is always on our minds. Her spirit is always with us, especially when we are about to perform. She is with us . in spirit"

This is not the first tribute to Makeba. Kubeka remembers a special performance in Cape Town when SA Agulhas II vessel was dedicated to the memory of "Mama Africa" at a ceremony celebrating the arrival the ship on May 3 2012.

Masuku says she was in London when she received a frantic call from BBC Africa Service about the death of Makeba.

"I could not attend the funeral because of contractual obligations. It has been six years since her passing and it feels like yesterday.

"On her anniversary, I light a candle without fail because I could feel her spirit. I would listen to some of the songs I wrote for her. I feel her".

She was one of the most visible and outspoken opponents of South Africa's apartheid regime from the 1960s until its dismantling in 1990.

The two legends also paid tribute to Dolly Rathebe who was called the lady of song. Rathebe was also a model of note as she became a hit with Drum readers in the 1950s.