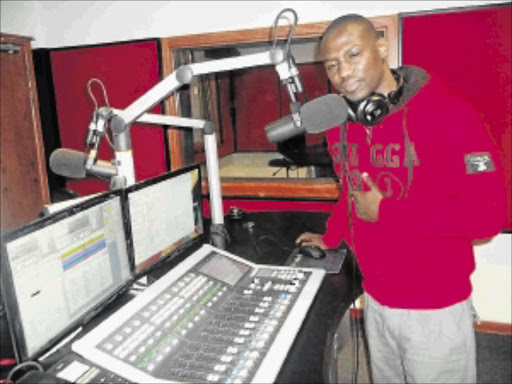 A RADIO deejay in Limpopo has taken to the airwaves to discourage South African men from getting the snip.

He is urging his listeners to reject the government's circumcision campaign.

Thabo Moatshe has made a shocking claim that the government's initiative at HIV prevention by having four million men circumcised by 2016 is flawed and misleading. He has publicly declared he would not get circumcised. His campaign is gaining momentum on Facebook.

Moatshe, who is the afternoon drive show host on Lephalale FM on weekdays, and also does the gig guide on Thobela FM's graveyard shift on Saturdays, told Sowetan yesterday that the government's campaign only served to promote the opposite message against safe sex.

"Most men think that just because they are circumcised, they will not [be required] to use protection. Also, they are not giving people all the facts in order for them to make an informed choice about undergoing the snip."

He said men were pressured to flock to clinics without knowing about the benefits of keeping their foreskins intact.

"Your foreskin is there for a reason ... (to) make sex more enjoyable," he said.

Moatshe said he opposed the government's initiative so much that he was also part of a group called Intactivists, which has 2081 members on Facebook.

"These are a group of people who love and have accepted themselves and their bodies, and will not allow anyone to cut it."

Inactivists member, 26-year-old Ishmael Dikobe, of Mafikeng, joined the group because he refuses to becircumcised.

"There was a very high percentage of men circumcised between 2009 and 2011, but there are still more reports of HIV infections," Dikobe said.

The spokesman for the ministry of health Joe Maila has dismissed Moatshe's claims as misinformed.

"It has been scientifically proven that getting circumcised will reduce your risk of getting HIV, so if he wants to keep his foreskin, he can, but he shouldn't discourage other men from [getting circumcised]. It's completely irresponsible of him because he's not a doctor or a scientist," Maila said.

Dr Jabulani Pooe said although he agreed with Moatshe that the government's message could be misinterpreted, he needed to speak from a more informed position as the advantages circumcision far outweigh the cons.