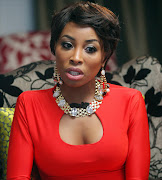 Generations actors have opened a can of worms in the television industry as they continue to strike for better salaries and working conditions.

Now socialite and actress Khanyi Mbau has revealed thow much she was paid to star on Muvhango.

In an interview with entertainment journalist Nicky Greenwall, Queen of Bling revealed that her first acting job with Muvhango for the role of ‘Doobsie’ earned her a huge amount.

“Yes I made money from Kideo Kids but it was always my mom’s money. And here I am, the first pay cheque, boom, in my account.

“And I’d only opened the account two days before because they told me, 'We need an account to put your money in',” Mbau said speaking to Nicky Greenwall.

Sowetan Live contacted Mbau, she explains the big pay check was not a monthly salary but a once off payment for her short stint in the soap.

“It was not a monthly check; I was paid for the season. At that time Lindiwe Cebi who played Doobsie was in hospital,” she said.

Mbau was fired from the soap for reportedly spending too much time partying and appearing in the tabloids.

When asked whether she sympathizes with the fired Generations stars over salary demands she said: “It’s a very sensitive issue, holistically South Africa needs an intervention in the art industry. So I would like to not comment on whether their strike is valid or not.”

According to Timeslive, the South African Guild of Actors reports that soap stars earn:

An intermediate actor on Binnelanders - R27,500 a month

An intermediate actor on Isidingo - R28,000 a month

An intermediate actor on Generations - R40,000 a month

An experienced actor in a support role on Isibaya - R30,000 a month

An experienced actor on Isidingo - R40,000 a month

An experienced actor on Generations - R60,000 a month