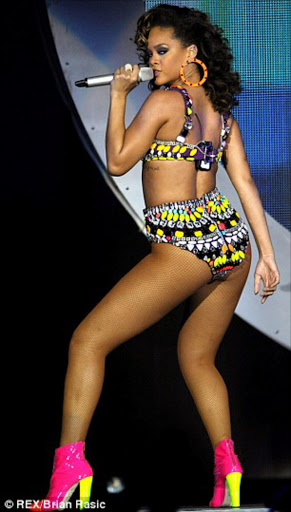 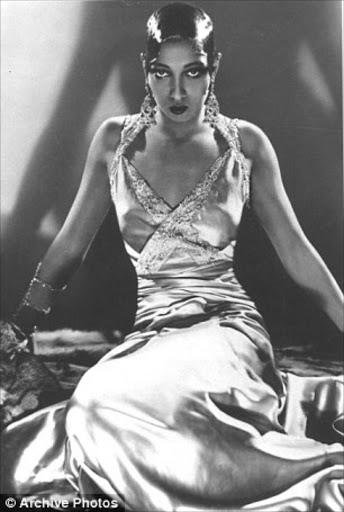 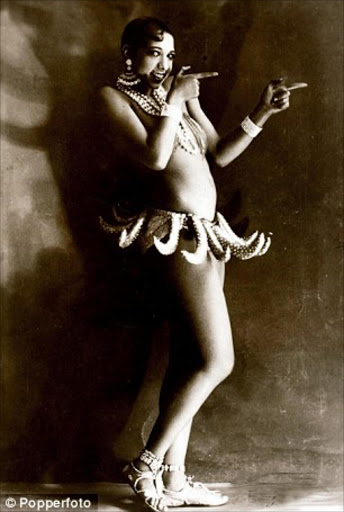 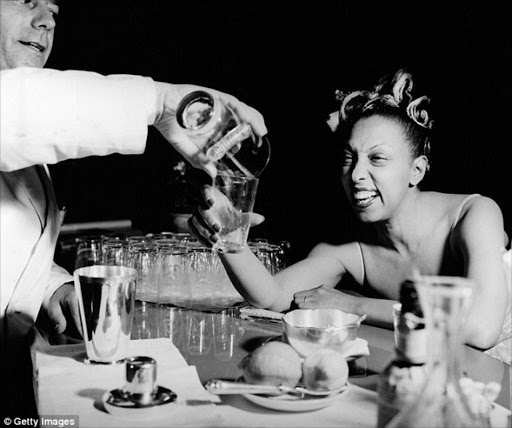 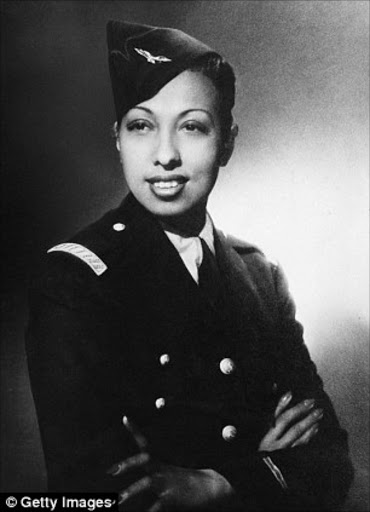 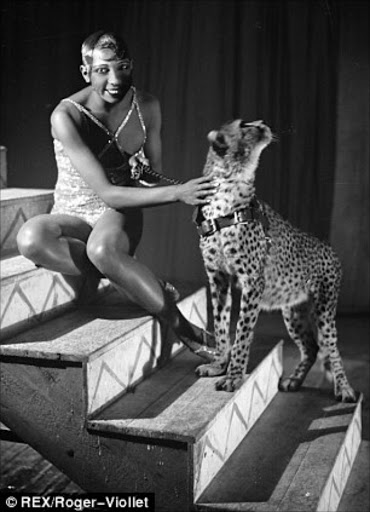 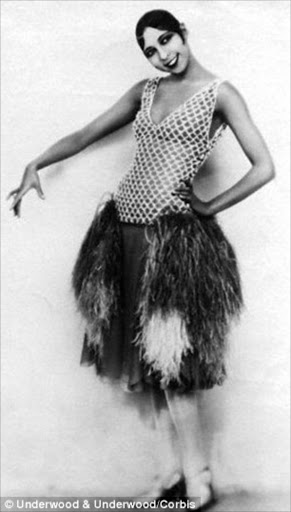 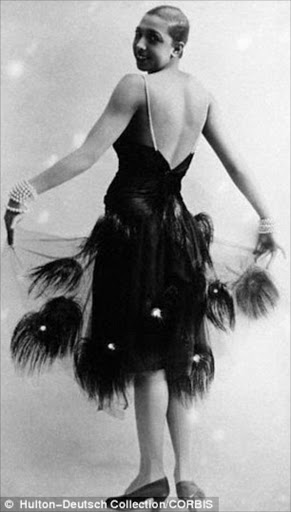 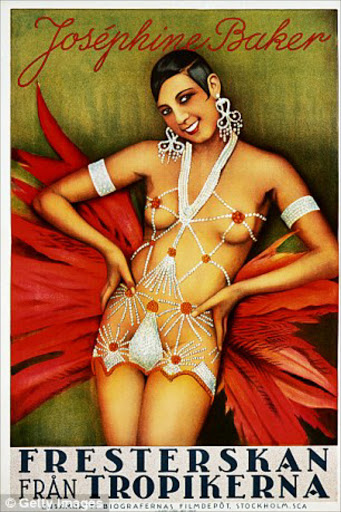 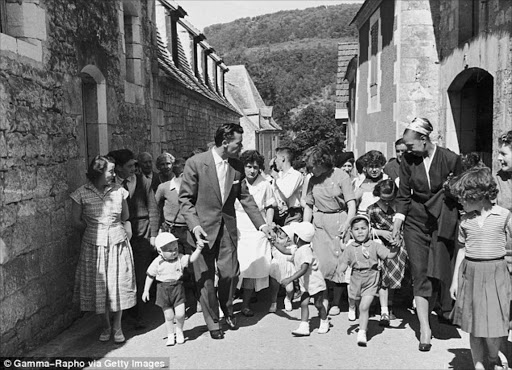 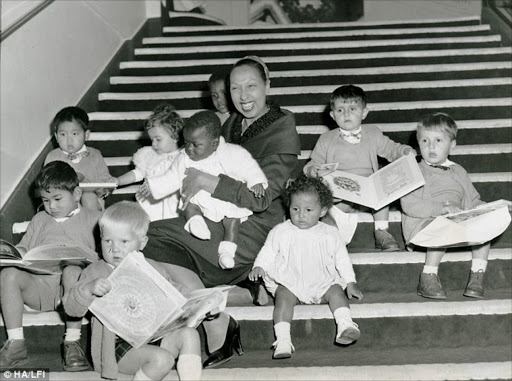 Wilder than her pet cheetah, the sex-mad Black Venus who outwitted the Nazis: Remarkable story of Josephine Baker

Under scorching stage-lights, Josephine Baker stepped out in front of the audience entirely naked, but for a few strategically-placed flamingo-feathers.

Her male dance partner carried her upside down, her long, slender legs stretched out in the splits.

He set her down, and she began to dance. As the light played on her coffee-brown skin, her body seemed to become almost molten as she wound herself around her partner.

She was, she later recalled, lost in the eroticism of the moment, ‘intoxicated, driven by dark forces I didn’t recognise,’ as she writhed seductively before shuddering to a climactic halt.

For a few moments the Paris audience remained silent, as if stunned. Then they rose to their feet as one and erupted in ecstatic applause.

She was hailed as the ‘Black Venus’. Picasso dubbed her the ‘Nefertiti of now’. Author Ernest Hemingway called her ‘the most sensational woman anyone ever saw’.

It was the start of an extraordinary career.  Josephine Baker, the girl from the St Louis ghetto, rose to become one of the greatest divas ever, an icon of the Jazz Age, talented and glamorous, but also decadent and amoral.

Today, all that many people remember of her is that she danced naked except for her famous tutu made of (fake) bananas.

However, this summer, a new play about Josephine, directed by Phyllida Law — mother of the actress Emma Thompson — captivated London theatre audiences with her rags-to-riches story.

And a film about her is to be released next year — it is rumoured that the controversial singer Rihanna might play her.

But while Rihanna has endured her own share of scandals, her drug-taking and self-conscious exhibitionism pale in comparison to Josephine’s jaw- dropping exploits.

Although Josephine might have acted the diva, spent extravagantly, behaved outrageously and numbered her lovers (male and female) in the hundreds, she was also courageous and principled, spying for the French Resistance and campaigning against racial segregation in America.

She was born in 1906. Her mother, Carrie, was a former dancer, her father — it is thought — a drummer named Eddie Carson, who left shortly after Josephine’s younger brother was born.

Carrie had two more children, but struggled to pay the rent on her washerwoman’s wages and the family moved from one filthy home to the next.

Carrie blamed Josephine’s birth for the premature end of her dancing career and frequently beat her. Josephine remembered her mother saying that ‘she hated me and wished I were dead’.

Then, in 1917, when Josephine was 11, her St Louis hometown erupted in race riots. Mobs of white troublemakers invaded black districts, killing 100 people.

Josephine witnessed ‘a friend of my father’s face shot off, a pregnant woman cut open’. It left her with a fierce loathing of racism and a determination to escape St Louis.

Desperate to leave her miserable home life behind, in a casual ceremony at the age of 13 she married Willie Wells, a man twice her age whom she met while waitressing. Amazingly, neither the Missouri authorities (who cared little what kind of relationships took place within the black community) nor Josephine’s callous mother had any problem with her marrying at such a young age.

But the union did not bring Josephine any peace. They argued constantly and on one occasion Willie hit Josephine over the head with a bottle. He left. The marriage had lasted just eight months.

Soon afterwards, Josephine was spotted dancing in the street by a talent scout and was taken on in the chorus of a travelling troupe, the Dixie Steppers. The leading female singer took Josephine under her wing — and into her bed — and coached her singing.

When the Dixie Steppers left St Louis, Josephine went with them. She was paid $10 a week and the chorus girls were expected to dispense sexual favours to the show’s financial backers.

When the show reached Philadelphia, Josephine was courted by a kindly man named Willie Baker. Still aged just 15, she married him — although she had not divorced her first husband.

She auditioned for an all-black musical, Shuffle Along, winning a part in the chorus. She left Philadelphia and her husband behind. As the end girl in the chorus, she began adding comic twists to the dances, stealing the scenes she was in to the fury of the other girls, who called her ‘Monkey’.

She cemented her position as star of the show by sleeping with the producer.

The show toured America to huge acclaim. Josephine was on the cusp of stardom.

In 1925, aged 19, she was spotted by a producer looking for a singer to star in an all-black cabaret in Paris. Reluctant to leave the U.S., Josephine was persuaded by a $200-a-week pay cheque.

But when she refused, and threatened to return home, the producers simply told her she could not have a ticket home until she had done as they asked. Penniless, Josephine had no choice but to comply.

But after her sensational first-night success, driven by those ‘dark forces’, couturiers flocked to dress her, and she received thousands of marriage proposals from besotted admirers.

Although she loved Paris and its relative racial equality, she was lonely and homesick, and filled her hotel suite with animals: two rabbits, a snake, a parakeet and a pig called Albert.

It wasn’t long before she was poached by the famous Folies Bergere music hall. It was here that she showcased her most famous costume: the banana tutu. It had been designed for her sensuous ‘jungle dance’, by the playwright and designer Jean Cocteau and consisted of a skirt of fake bananas which in later shows were sprayed golden or spangled with diamante crystals.

Her celebrity grew. ‘Josephine’ dolls were sold, and fashionable women cut their hair in sleek ‘Josephine’ bobs. Everyone wanted to bed the Black Venus and she had hundreds of affairs with both men and women. The French writer George Simenon, who would boast of bedding 10,000 lovers in his lifetime, said that she was the only woman in Paris who could match his sexual energy.

Men were said to queue outside her hotel room. She was rumoured (probably falsely) to moonlight in a brothel to satisfy her sexual appetite.

One lover was a Sicilian gigolo, Pepito de Abatino. He became her manager, persuading her to open her own nightclub, Chez Josephine, where she sang, danced and flirted with the patrons.

She made two successful films, becoming the first black actress to star in mainstream cinema. She toured Europe to great acclaim, ignoring the taunts of fascists and racists, and even ammonia bombs thrown at her on stage.

Despite living with Pepito, she took other lovers: a Swedish prince, an Indian Maharajah who showered her in jewels, a handsome dancer and an American actress.

She paraded around Paris leading a tame cheetah wearing a diamond collar and bought a large house in the suburbs which she filled with pet monkeys, but she never forgot her childhood poverty. She often paid the bills of her poorer neighbours and gave generously to charity.

After Pepito’s death, in 1937, she married a French industrialist, Jean Lion. The marriage turned sour when he tried to mould her into a dutiful housewife.

When war broke out, Josephine was recruited by the French intelligence service to gather information at parties.

Staunchly anti-Nazi, she even piloted a plane taking Red Cross supplies to Belgium.

In 1940, when the Germans invaded, she left Paris for her chateau in the Dordogne, where she bravely hid Resistance fighters.

When German soldiers came to search the house, she simply charmed them into leaving — and helped spirit the fugitives out of France at great personal risk.

She toured neutral Spain and Portugal, smuggling messages for the Resistance written in invisible ink in her underwear. ‘Who would dare search Josephine Baker?’ she reasoned.

She returned to Paris in 1944 to a heroine’s welcome, and was given the Medaille de la Resistance and Croix de Lorraine. Divorced from Jean Lion, she married her band leader, Jo Bouillon, in 1947.

Long before the actress Angelina Jolie began collecting orphans, Josephine had dreamed of a creating a ‘Rainbow Tribe’ of children of all colours to live in a Utopian community at her chateau. She adopted 11 boys and two girls, from Korea, Japan, Columbia, Israel, Africa, Venezuela and France.

She was determined to give them the happy childhood she had been denied, but she was inconsistent, showering them with gifts then scolding them furiously. Their upbringing was largely left to nannies.

In 1951 she toured America. Having fought against Nazism, she was appalled that racism was still so prevalent in the country. She spoke out against segregation, undeterred by threats from the Ku Klux Klan, and refused to perform in venues that did not allow blacks, forcing many to relax their rules. It was a major Civil Rights triumph.

In August 1963 — 50 years ago this month — she was at Martin Luther King’s side at the Washington March when he told America: ‘I have a dream.’ She too gave a speech, wearing her Free French Army uniform and medals.

Despite her enormous earnings, Josephine was hopeless with money and her fortune began to run out.

In 1969, utterly broke, and her marriage to Jo Bouillon having fallen apart, she was forced to sell her chateau and move to a two-bedroom apartment in Paris with all her children.

Princess Grace of Monaco — who had long admired Josephine for her politics — came to her rescue, helping her buy a villa in the South of France.

She continued to perform, if only to pay her bills and debts.

Offstage, she was no longer the glamorous star. Years of dyeing her hair had burned her scalp and left her almost bald. Her legs were swathed in bandages to protect them from strain, and her health was failing. In 1973, she had a heart attack and a stroke. But Josephine was indefatigable.

In April 1975, her admirers arranged for her to perform a revue in Paris, celebrating 50 years since she conquered the city. The moment Josephine stepped on stage she was transformed from frail elderly lady to a sparkling star.

Wearing a sequinned body-stocking that revealed a sensational figure even at nearly 69, she drew gasps from the audience, which included Princess Grace of Monaco, Rolling Stone Mick Jagger and actress Sophia Loren.

After her second triumphant night on stage, she partied until the early hours with the energy of a teenager. The following day, her assistant found her in bed, unconscious, surrounded by ecstatic reviews of her performance. She had suffered a stroke and died a few hours later.

She was buried with full military honours in recognition of her wartime heroism.

Twenty thousand people lined the streets to say farewell to the Black Venus who had captured their hearts. She was not just a star, but a heroine.

The girl from the ghetto had come a long way.

Source of story and photos: www.dailymail.co.uk