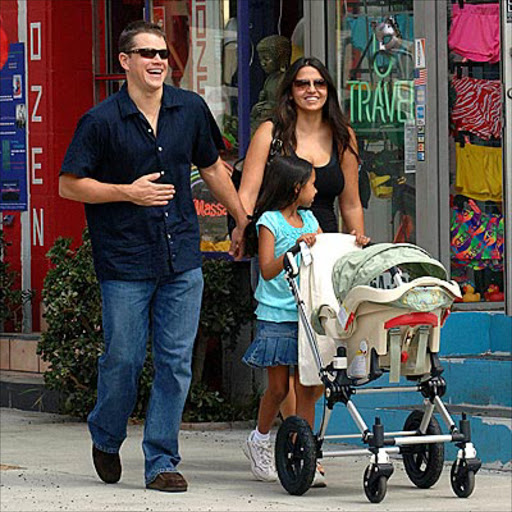 The 'Promised Land' actor - who is raising four daughters with his wife Luciana - has revealed his family enjoy two back-to-back celebrations, which both include gifts, because his wife is from Latin America and they celebrate on Christmas Eve and Christmas Day.

"We have this weird fusion for Christmas, but I think it just means more gifts for the kids, so they're into it."

The 42-year-old actor said he is looking forward to enjoying a low key holiday with his family, including his step-daughter Alexia, 14, and biological daughters Isabella, six, Gia, four, and Stella, two, after recently completely a busy promotional tour for his new movie.

He said: "I'm just going to hang out with my kids. We've been on the 'Promised Land' train a little bit for the last week or so, and we're looking forward to just settling down."

Matt has been married to Luciana, 36, for seven years and the 'Departed' star loves how supportive she is.

A source previously said: "He's found the trick to having the most normal life possible. Luciana lets him work and is there for him when he needs her. He loves coming home to her after months on set."

Matt recently admitted he hopes his daughters don't want to follow him into acting.

He said: "I would try to steer my daughters away from acting. Women are in a different business than we are. It is just brutal for women. For men, the roles get really good at 40 and beyond. And that's when you really start doing your best work."