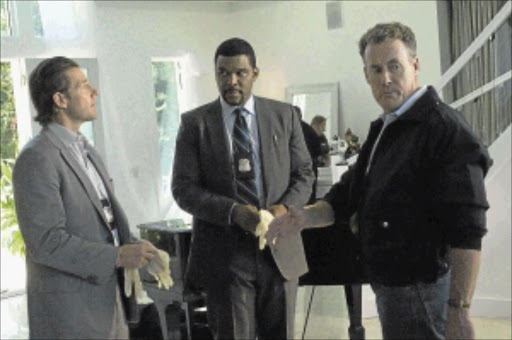 WHEN I first heard that Tyler Perry would be acting in an action movie, I burst out laughing.

It was quite hilarious for I couldn't picture Ms Madea without the dress and the ridiculous make-up.

But he does play the lead character of Alex Cross in Alex Cross. Yep, the tautology is not a mistake.

That was even funnier because he has big shoes to fill as Alex Cross.

I mean, Cross has been depicted by big names such as Morgan Freeman in Kiss the Girls and Along Came a Spider.

Question is: who is Alex Cross?

After seeing Perry as Cross, I am more convinced than ever that he should stick to his day job, which is making soapie-type movies such as Why Did I Get Married and slapstick stuff such as Madea.

Perry's attempt at playing a serious, gun-cocking character left a sour taste in my mouth and my face is still twisted from the reaction.

No, he can't pull it off and he tries too hard.

The weak script and Rob Cohen's poor direction does not come to Perry's rescue either.

Maybe we should blame these elements.

But then again, I have been complaining over the years that he should try other genres and venture out penning and producing movies that focus on black people.

I must have finally got to him - praise the Lord Almighty - for he accepted the role of Cross. But for that he must thank Idris Elba who did not take the offer.

And Elba would have certainly given a thumbs-up performance because he knows how to shine in such roles.

Those of us who have seen Cross movies know that Perry carries the cross of being a darkie detective-cum-psychologist in the US with a wealth of experience in the Washington DC homicide section. He later becomes a top FBI agent.

He himself is conflicted and unlucky in love.

But this time, Cross is a psychiatrist and a cop in Detroit, and he has a wife Maria (Carmen Ejogo), kids and, of course, his granny Nana Mama.

But one thing's for sure, women around him are prone to die brutally and that's a shame because he's a really nice guy - except when he has a gun in his hand.

A psycho, oddly named Picasso (Matthew Fox), kills women around Cross and it's not pretty.

For starters, he gets rid of Fan Yau (Stephanie Jacobson), a businesswoman.

Picasso is an assassin who paints sketches of his next targets (hence his name) and he's also linked to the murders of high-profile individuals.

CEO Leon Mercier (Jean Reno) is one such target, but it seems he's the mastermind of Picasso's assignments.

The plot is brilliant, but the execution is awful. So is Perry's performance, but he is an adorable character on screen nonetheless.

The same goes for Matthew Fox.

Carmen Ejogo as Maria is far better than Fox and Perry.

Perry's shoes are too small for Cross. He looks good though as Cross - he has lost some weight (hint, hint, ladies).

And I hear he's lined up to play the lead in the upcoming sequel, Double Cross. God help us.