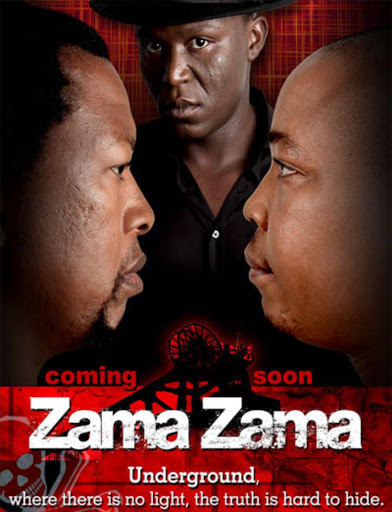 Theirs is a world of secrecy, criminal cartels and extreme violence in utter darkness.

Deep under the surface of the Witwatersrand – South Africa's gold mining region – exists a brutal alien world…of the Zama Zama. They are illegal miners that make a living by mining in both operational and abandoned mine shafts.

Zama Zama, the movie, is a story about two brothers – Malcolm (Lindani Nkosi), a successful businessman in the mining industry and his long lost brother Joseph (Presley Chweneyagae), one of those who work in the underground tunnels – playing off against the tension of the mines' punitive actions against illegal miners.

Presley, better know for his role in the award winning movie Tsotsi, describes his character in Zama Zama as a being passionate.

"Joseph is a young man who had always looked up to his brother, and aspires to live the high life. He is a strong-willed person, who stands up for what he believes in, like his fellow Zama Zamas."

The movie took seven weeks to film. "Shooting the movie was like a boot camp. I had the opportunity to share the screen with a few of the best".

The film explores themes of guilt, forgiveness and reconciliation taking place in this subterranean milieu. When Malcolm finds out that his alienated brother is one of the intended victims of a planned raid against the Zama, he decides to take action to save Joseph.