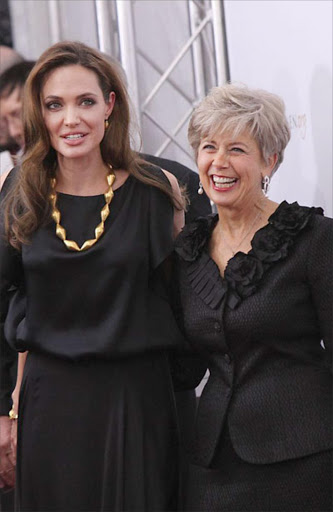 Jane - mother of her fiance Brad Pitt - recently wrote a letter to her local paper in support of Republican presidential candidate Mitt Romney in which she revealed she doesn't support same sex marriage or abortion, and her views have reportedly left Angelina angry.

A source told PerezHilton.com: "Jane has never wanted to talk politics with Angelina. She knew it would cause greater issues for them, and she wanted to try to have a relationship with the mother of her grandkids. She never thought her letter would be such a big deal."

Angelina and Brad are two of the most prominent gay rights campaigners in Hollywood, and at one the actor stated he wouldn't marry the 'Salt' star until same sex marriages were made legal across the US.

If Brad won't try to change his mother's opinions, Angelina is ready to step in to try and convince her future mother-in-law to change her views.

The source added: "Angelina has told Brad he must educate his mother, but Brad is too much of a mama's boy. If Brad won't do it, Angelina will have to take matters into her own hands and talk to Jane about how, as the mother of such a prominent celebrity, she shouldn't be writing letters that clash with her son's personal opinions. It'll inevitably end up in a huge blowout, with Brad stuck in the middle. Brad keeps telling her not to take this so seriously, but when Angie sets her mind on something, there's no talking her out of it."

In Jane's letter, she praised Mitt for being a "family man with high morals," adding: "Any Christian who does not vote or writes in a name is casting a vote for Romney's opponent, Barack Hussein Obama ... is a liberal who supports the killing of unborn babies and same-sex marriage."

Brad and Angelina - who raise six kids together, Maddox, 10, Pax, eight, Zahara, seven, Shiloh, six, and twins Knox and Vivienne, who turn four today- announced their engagement in April after seven years together.