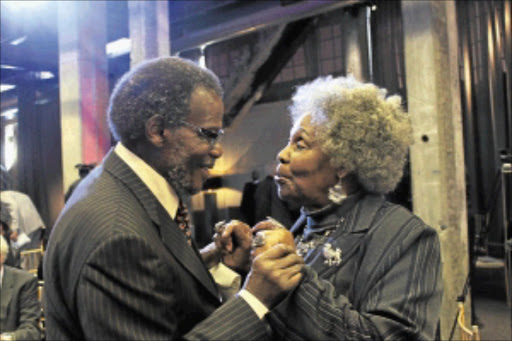 At a luncheon held at Turbine Hall, Newtown, those honoured with a Builder's Award certificate also included the late Dr Gideon Roos Snr - founder of Samro - and his sons Paul and Gideon Roos Jnr.

Vilakazi's certificate and cheque was received on his behalf by his wife, and that of the late Roos Snr was received by his son Paul. Inkatha Freedom Party leader Prince Mangosuthu Buthelezi received the certificate on behalf of his late mother.

Buthelezi was full of praise for his mother, who was an opera singer and composer.

"My mother's musical influence was not confined to South Africa alone. Her compositions are performed throughout the world. She was a gifted composer, singer and an instrumentalist who played Zulu traditional instruments as well as the auto harp and piano.

"I am proud today that my mother is being honoured at different levels, including the creation of the first full-length African opera about her life, Princess Magogo, by Professor Mzilikazi Khumalo," Buthelezi said.

"I dedicate this award to my big sister, Miriam Makeba, who is not here to receive it herself. I know she is alive today, for I believe as human beings we do not die."

Yesterday's inaugural Samro Builder Awards were in celebration of the organisation turning 50 this year.

First run by family members, it has since expanded to a fully fledged copyright administrator and collection society.