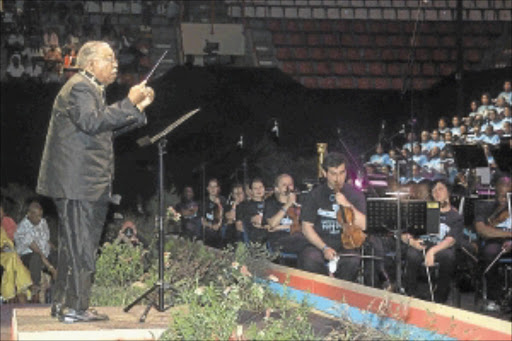 LEGENDARY composer, arranger, conductor and teacher Professor Mzilikazi Khumalo is due to be honoured for his immense contribution to choral music.

Khumalo, who turns 80 on June 20, is regarded as a genius in choral music circles.

He is also a professor emeritus of African languages.

The professor is renowned for producing what are regarded as the first African opera pieces - uShaka and Princess Magogo.

Khumalo has not only made choral music his life, but has also ensured that all the brilliant - living and dead - composers receive recognition. Together with another top choral music icon, Richard Cock, Khumalo led the popular Sowetan Massed Choir Festivals for many years.

Khumalo's tribute show, titled Sing Africa Sing, will take place at the Linder Auditorium in Parktown on May 27.

Choirs, including the Gauteng Choristers, Voices of the Nation, Chamber Choir, Sound of the Nation and Kopano Chorus, will honour the legend.

One of Khumalo's protegés Sidwell Mhlongo, is the conductor of the Gauteng Choristers.

Mhlongo has toured the world with the music fundi as a conductor. He says many composers and conductors in the sector look up to Khumalo because of his accomplishments on the choral music scene.

He says Khumalo still gets excited by writing new songs.

"Last year, he called me and told me that he was turning 80 and wanted me to be part of this event. I was humbled by his request because there are many conductors out there."

Ali Mpofu, the producer of Imizwilili and the man behind the idea, describes Khumalo as a blessing to the country's musical sector. He says it is important to honour him because of his vast contribution to the genre.

"Professor Khumalo has been part of our series ofSing Africa Sing, a series of music concerts conceptualised in a quest to further showcase and celebrate the art of choral music through honouring our icons.

"Since he will be celebrating his 80th birthday, we felt this was the right time to honour him," Mpofu says.