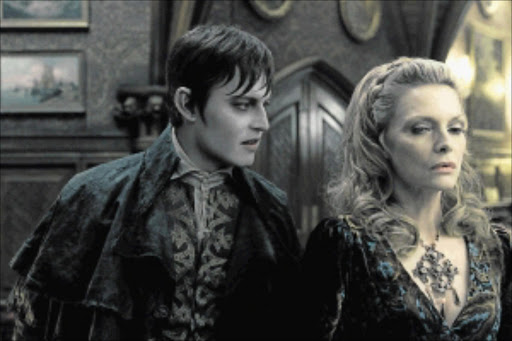 TWO years ago Johnny Depp and Angelina Jolie ventured into a banal, non-project that was titled The Tourist.

It didn't do well at the box office and Depp's fans, who defied negative reviews and saw the film nevertheless, were devastated.

The likes of us - clued-up critics who chopped the movie into an ill-prepared mincemeat dish - whispered to ourselves and said: "We told you so".

Dark Shadows seems likely to have another terrible sojourn at the box office for Depp and Michelle Pfeiffer.

That's such a let-down because I have a pocket full of admiration for both these artists.

But then, making a bloody good vampire movie is gravely serious business.

And it's not just a matter of adding stark dark lighting, applying bright reds (lipstick and writing in blood, and so on).

Also, it's not just a demonstration of which vampire has the scariest face. Vampire films are a difficult genre that requires artistry that's deeper than deep.

And just because the movie is based on a likeable soapie of the same name doesn't mean the movie version will be a roaring modern-day supernatural success. No, no, no.

Without a shadow of a doubt, Dark Shadows has an alluring visual appeal and it's shot meritoriously, but it misses the chutzpah - the spark - that could turn it into a hall-of-fame contender.

Maybe the script is to blame - I mean, can you picture a romantic vampire undertaking that somewhat degenerates into a lukewarm comedy?

No, wait. Let me save you the trouble - after all, I'm the reviewer. The story is devilishly appealing.

Barnabas Collins (Depp), a rich playboy, had no idea what he was doing (maybe he did?) when he broke the heart of Angelique Bouchard (Eva Green), an evil witch.

And, yep, now she's out to cause him and his family pain. As the saying goes: "Hell hath no fury like a woman scorned."

If a woman is rejected in love, she can be a cannonball of fire, that is, she can be very angry and dangerous.

Angelique resorts to what she does best; she turns him into a vampire and buries him alive. Yes, alive.

Two centuries later (you know with vampire stories, time can stretch for eons) he's let out of his tomb. Problem is, the world as he knew it has changed and he's a stranger.

To make matters worse his once-elegant residence has been ruined and his family has nothing to show for their former opulent selves. There's more.

As you can attest, these are aspects of an engrossing narrative, but I'm sad to point out that it falls apart.

Look, you go see it - it stars Johnny Depp. That's better than sitting at home scratching your head, wondering what to do with your entertainment budget.

Oh, Johnny boy, what have you gone and done this time?