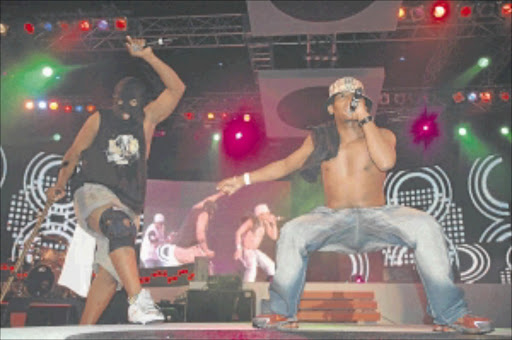 IN HIS HEYDAY: Brown Dash performs with Mzekezeke at the Sandton Convention Centre.

BROWN Dash, born Simphiwe Mpamile, symbolised those youths that dreamt of stardom but had no distinct glamour appeal to make it.

BROWN Dash, born Simphiwe Mpamile, symbolised those youths that dreamt of stardom but had no distinct glamour appeal to make it.

He was inarticulate, unemployable and aimless.

But, he had one concealed, magical spark within him: to turn whatever he touched into gold.

It could be said that he "founded" TS Records as he spawned hit after hit for owners Thembinkos "TK" Nciza and DJ Sbu Leope, providing the credible foil for Mzekezeke's first hit, Sguqa Ngamadolo.

He then, miraculously provided their first gold disc sales, in excess of 25,000 units, for his debut album Puff 'n Pass in 2002.

Brown Dash ought to have been a millionaire, at least by 2005, after the release of his second successful album, Phansi Komthunzi Welanga.

It was this album that was to go down in kwaito history as a classic and it won the Best Kwaito Album of the Year (2005).

In 2007 Brown Dash left TS Records acrimoniously, asserting that he had discovered TS Records was cheating him.

Moreover, his royalties from publishing ought still to be earning him a decent income. Still, he died poor.

At the time of his death, he was living in a commune in Melville.

On face value there was nothing special about Brown Dash. Privately, he was reserved, retiring, preferring the background. Most notably, Brown Dash had no special vocal prowess.

Originating from Zola's dusty streets in Soweto, where he had been inspired by another kwaito music kingpin, Mandoza, particularly his youth anthem - Uzoy'thola Kanjani - Brown Dash was street-cred personified, and yet he didn't claim it.

What moved him was the kwaito sound of his suburban boys Mdu, Zola, Mandoza and Mapaputsi.

But he was not as flash. To him, the glare and glitter of stardom in media remained foreign.

Soon after his mild success but wild life, this seemingly wild, yet truly hopeless boy with no prospects of employment surprised many when he quietly married his sweetheart, Lunga.

For the record: Lunga died in May 2011, under mysterious circumstances.

It has been fitting that Brown Dash passed on after his penultimate performance at the 18th South African Music Awards at Sun City.

Brown Dash's last public performance, albeit in a private members only club, was at kwaito legend Mdu Masilela's 40th birthday at Davinci, Sandton.

Brown Dash and Mdu were joined by General, born Siphiwe Sibisi of Chiskop popularity, and they brought the house down.

He died at Chris Hani-Baragwanath Academic Hospital in Soweto on Wednesday. He leaves behind two sons, a daughter and mother.