Radio drama at its best 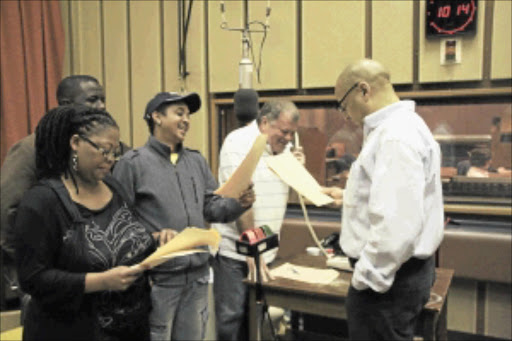 REHEARSING: The cast of Radio Vuka during the recording at SA FM studios in Auckland Park. PHOTO: BUSISIWE MBATHA

SEVERAL well-known actors are the collective behind the success of award-winning drama Radio Vuka, which airs on SA FM at 4pm weekdays. However, the actors' real identities remain unknown to listeners..

The series revolves around the workings of a community radio station and gives listeners a peek into the lives of a group of South Africans whose main focus is to entertain, educate and enlighten their fellow citizens every day.

Makapan previously starred in Generations while Khumalo is known for his role in The Coconuts.

Jacob is a founding partner of Radio Vuka with Harold Whitfield (played by Graham Hopkins). The latter is famous for his stage role in The Native Who Caused All The Trouble.

Looking at the studios, which are divided into three small cubicles, one would think an investigation troop has just left after an unsuccessful search.

The dead room serves as the outside environment, and has been made to resemble the real world. The sound is also very effective.

Everything seem to be older than the cast themselves, from the deck in the studio to the antique boxes performing other jobs.

So are the props.

Director Bruce Miller says there is nothing fancy about the studio, everything has been there for more than 20 years. "Our focus is the spoken word, how well are words articulated and when is the right pitch projected.

"We are not creating a frivolous entertaining soap, we are telling a South African life story as you know it.

"Our presenters celebrate our rich cultural heritage through the ups and downs, and the triumphs and disasters that are part and parcel of the industry," said the legend of radio drama.

The series, which has attracted listeners from as far as Croatia and the UK through Facebook, will soon be celebrating its 800th episode. Most of the audience are said to be aged between 35 and 40 years old.