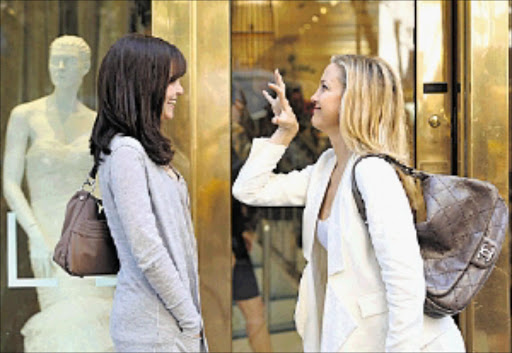 I DREAD writing the first line of any review if the movie does not afford an uneasy-to-please scribe like myself the enthusiasm and the excitement to praise it.

Alas, what can I do, it's my job - and a job is a job - and today my job is to figure out what's so interesting about Something Borrowed to aid you, dear flick lover, in making your weekend colourful.

I'm afraid I'm about to bore you stiff. But you might find yourself in the cinema admiring this love triangle, holding your squeeza's hand and both of you laughing yourselves silly. Hopefully.

Don't get me wrong: you can stomach watching Something Borrowed as long as you don't expect too much. You will find yourself laughing but you might stop short and not go the full stretch.

This might qualify as sympathetic laughter or, to be spot-on, grinning. That's so pretentious and you don't want it to happen to you.

Let me touch on the storyline quickly before I depress you further with my over-analysis.

Rachel is a lawyer and she's single and available and a bit unlucky in matters of the heart. Darcy and Dex, also a lawyer, are lovers and are engaged. Ethan, Rachel and Darcy have been friends since childhood. No, Ethan is not gay, not by a long shot. In fact, he reveals later that he has been in love with Rachel from way back.

Here are the most interesting bits: Rachel has been secretly in love with Dex since they were in law school; Dex reveals that he loves her too but only after the two end up in bed together but agree that it was a regrettable mistake.

Darcy herself is not an angel and gets too cozy with Dex's mate Marcus (Steve Howey). It's a soap opera that could easily have been a sitcom (maybe Something Borrowed should have been a television production of that nature), I know.

Meanwhile, Dex's mother (Jill Eikenberry) is going through severe depression and the only thing that keeps her sane is the thought of her son getting hitched to Darcy. Only if she knew what's going on. A heart attack is on the cards.

The acting in Something Borrowed leaves a sour taste, unless you're a lemon lover and you don't mind the taste of lemonade with an aftertaste.

Hudson is a great actress and pulls it off in this comedy, only to be let down by its dullness, particularly her unlikable combination with Dex. It's not an inspiring pairing, if you get my drift. Something is missing.

But one thing for sure, the movie does attempt to display the complexity and fragility of friendships between sexes. Trust and respect of boundaries between friends when it comes to love is put to a serious test and neither survives.