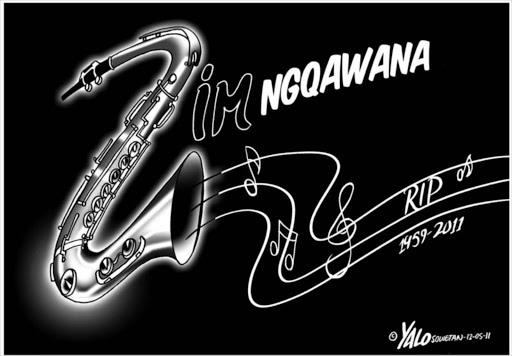 THE passing away of Zim Ngqawana so suddenly on Tuesday has not only sent shock waves in the music industry but has also highlighted just what a huge loss we have incurred yet again.

His death comes in the wake of yet another severe industry loss. We are still reeling from Sy Buthelezi's death who was buried last weekend.

But there is a bit of a difference between the two music greats.

Buthelezi was a kingmaker, producing choice musicians that represented the country well wherever they went in the world. Ngqawana, on the other hand, epitomised the brilliant eye of an artist and repertoire executive who smelt talent a mile away and stuck by his gut feel in spite of objections.

Ngqawana was very talented. He was a genius, somebody who took to the stage and immediately commanded attention. Perhaps his stature helped as he was a big man, serious, intimidating, no nonsense kind of man.

You rarely saw him smile, but when he played his music, he reflected a picture of tranquility, content with the work he had spent months in the studio stringing together.

His was the kind of music you did not immediately take to like a duck to water. It was intense, sensitive and hung around you like the vapour of the most expensive perfume. Depending on the audience, music gurus would feel him while others were still struggling to get there. There is no doubt that most of his music is catalogue material that will live long after his ashes have disintegrated into the soul.

And then there was that classic that everybody knew and sang along to even though they did not know the title or the singer. I am talking about iBhoffholo Indawo Yamageza and the traditional celebratory song Qula Kwedini.

Those songs are classics and testament to his immense talent. As usual he was under-utilised here at home while universities across the US clamoured for his attention. He spent months lecturing the captivated students on the intricacies of African music.

Though I will miss his genius and talent, I would like to forget his personality. He was not a people's person and as a result offended many.

Interestingly, he was totally immune to his many personal faux pas. I suppose that no matter how offended, the audience never begrudged him his genius.

We can only pray that his family find the closure that will enable them to go through the sorrow, but above all, celebrate a life lived well by bringing so much joy to music lovers, or kanjani ...

- I would like to unreservedly apologise to Welcome "Bhodloza" Nzimande and his family for incorrectly stating that he was late in last week's column. The popular broadcaster, who spent years with Ukhozi FM before moving on to greater pastures, is very much alive.