At the forefront of tackling the Covid-19 pandemic by providing consumers some relief, are women like Dr Nolwandle Mgoqi-Mbalo, Head of Short-term Insurance at Standard Bank Insurance. 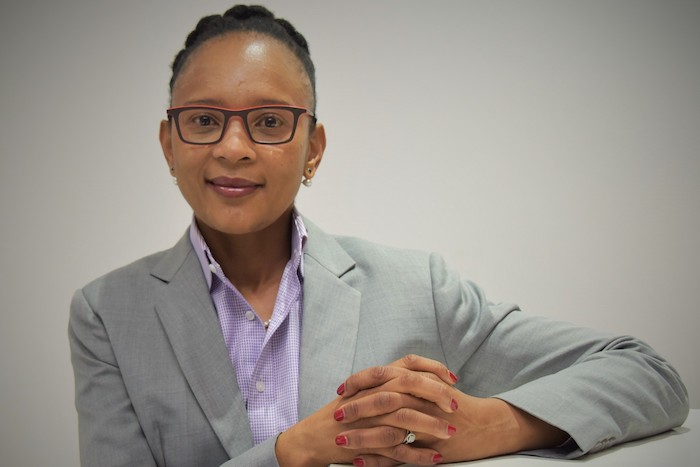 Born and raised in Gugulethu, Cape Town, Dr Nolwandle Mgoqi-Mbalo, Head of Short-term Insurance at Standard Bank Insurance built her career in the industry over the last 15 years through hard work, perseverance, supportive mentors and a willingness to take risks with her career.

Mgoqi-Mbalo says there is nothing extraordinary about her upbringing except that she was raised by parents and a family that placed emphasis on self-development and took pride in exemplary livelihood in the values of giving, faith and education.

“I am from the generation where ‘I am because we are’ – where my upbringing was a collective effort from not only my family, but extended family members, my primary and high school teachers as well as the community at large,” she says.

Although she grew up not having much, she was taught the principles of saving, budgeting and spending sparingly at a young age.

Her grandmother, a hawker, was always teaching her the basic concept behind the time value of money and not spending what you don’t have.

She says her lightbulb moment was when she understood that finances were more than budgeting and that retirement planning needs to be a top priority for which you have to save as early as possible.

She applied some of those lessons during her university years at Smith College, a women’s college in Massachusetts, USA, where she completed her undergraduate studies.

Mgoqi-Mbalo completed an MSc at Howard University before obtaining her PhD at Wits University.

Although her post-doctoral fellowship at the University of California Los Angeles (UCLA) was on a full scholarship for tuition and accommodation, Mgoqi-Mbalo says she did part time jobs, working on campus on weekends and school holidays.

Now, with her own children under 12, she passes on the money lessons by having them earn money for chores like making their beds and keeping their rooms tidy.

“I never intended to make a career in financial services – opportunity presented itself and I never left,” she says.

Before joining Standard Bank two years ago, Mgoqi-Mbalo was the co-founder of the short-term insurance offering built for Liberty.

“I know it’s difficult times and a lot of people are re-evaluating what they should be spending or saving their money on and short-term insurance is unfortunately the one area where people feel there could be a savings. On the surface it seems the easiest to cancel, but in the event of a loss, the impact can be severe,” she cautions.

She says a big part of re-evaluating your budget is to also have discussions with your insurance adviser or insurer directly to look at ways to reduce your premium.

Mgoqi-Mbalo gives an example of someone she knows taking a sabbatical, resigning from her job to study full time and mentioning that she considered cancelling her car insurance since she would not be driving much.

“However, she got a quick wake-up call after seeing an accident due to irresponsible driving. She realised cancelling her car insurance could not guarantee her safety on the road no matter how safely she drove,” says Mgoqi-Mbalo.

Short-term insurance is an important part of personal finance planning because it ensures you are covered against unforeseen accidents, events and unplanned losses, she says.

Mgoqi-Mbalo laments the fact that women are not taking charge of their own finances. “Women are still at a disadvantage as slightly fewer feel ‘well placed’ to make financial decisions, get anxious and tend to delegate the responsibility to others,” she sighs.

She avoids making bad investments by doing meticulous due diligence. Taking the time to understand the business and/or entity you choose to invest in is important and that even if it’s not a guarantee, at least you would have explored all your options, she says.

Planning for your losses and understanding how you will recover it is also essential, she says.

Mgoqi-Mbalo strongly advocates for an emergency fund of three months’ worth of salary for unforeseen life disruptions. “You can save as little at R500 a month depending on your affordability. Keep that up until you have savings equal to at least three months' salary,” she says.

She’s also passionate about mentorship and takes part in a number of programmes geared towards the development of “girl children”.

“Pressing for progress and financial independence is about having the confidence to make decisions and sticking to them,” she says.

Muvhango Lukhaimane sees no need to showcase her hard-won success

Resisting the urge to showcase success with material things means PFA Muvhango Lukhaimane has secured her own retirement while helping members who ...
Business
2 years ago

Getting a head start doesn’t make you a saver, says financial education expert

Being a disciplined saver is a habit that has taken Dhashni Naidoo years to develop, but one that the manager of consumer education at FNB says has ...
Business
1 year ago

The South African banking sector’s first black woman CEO opens up to Money about the value of education and how money can buy everything, including ...
Business
2 years ago
Next Article