The only glitch in the process was when scans of my fingerprints didn’t match my prints at Home Affairs. Apparently, hand sanitizer makes it harder to capture print details. 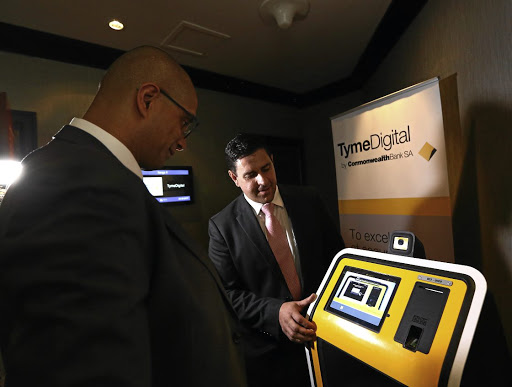 Six minutes is how long it took to open a TymeBank account this week, unassisted at a bank kiosk inside my local Pick n Pay, and without a single piece of paper.

There was only one glitch in the process when scans of my fingerprints didn’t match my prints at Home Affairs. Apparently, hand sanitizer makes it harder to capture print details. So instead of my fingerprints, other personal information was used to verify me.

Now 18 months old, TymeBank has in excess of two million customers and is signing up about 125,000 customers a month, Cheslyn Jacobs, the bank’s head of sales and service, says.

The vast majority of customers (85%) open a bank account at one of the bank’s 800 kiosks in Pick n Pay and Boxer stores countrywide, while the rest sign up on the bank’s website.

The drawback of signing up on the website is that you don’t get issued with your bank card immediately. You have to go to a kiosk to produce your card.

Tyme’s Everyday account, which is a transaction and savings account in one, is free to open (you need not make a deposit) and doesn’t attract a monthly fee.

The account is a pay-as-you-use and you see your bank charges in real time rather than at month end. There’s no charge for numerous transactions, such as balance enquiries at kiosks, your first ever deposit and your first deposit per month of up to R5,000, prepaid electricity and airtime and data purchases.

“We want customers to sit with their statements to add up the cost of banking and change their behaviour [accordingly] … pay-as-you-use literally,” Jacobs says.

Drawing cash from Pick n Pay or Boxer tills is free, but if you draw from an ATM, it will cost you a hefty R8 per R1,000.  Jacobs says Tyme makes very little from this transaction and says it compares favourably with Capitec, the bank’s closest competitor, which charges R8 per R1,000 withdrawn from the bank’s own ATMs.

You can deposit money into your account at till points – these deposits are charged at R4 per R1,000.

If you’re an Android user, you can download the bank’s app to your smart phone and transfer money from any bank account to your GoalSave pocket at no cost.

An app for iPhone users is in development and will hopefully be available next month, Jacobs says.

If you don’t have a smartphone, you can transact via USSD.

Jacobs says almost 60% of customers are “active”, meaning they’ve used the account at least once since opening it. In other words, 40% of customers have merely opened an account, but haven’t started using it. He says the number of active customers is growing monthly, as customers gain confidence in the bank.

Most of the money held by the bank (60%) is in GoalSave pockets as opposed to the transaction part of the accounts, which is unsurprising considering the highly competitive interest rates the bank pays for deposits.

Jacobs says Tyme’s interest rates are the best in the “liquid” savings market. 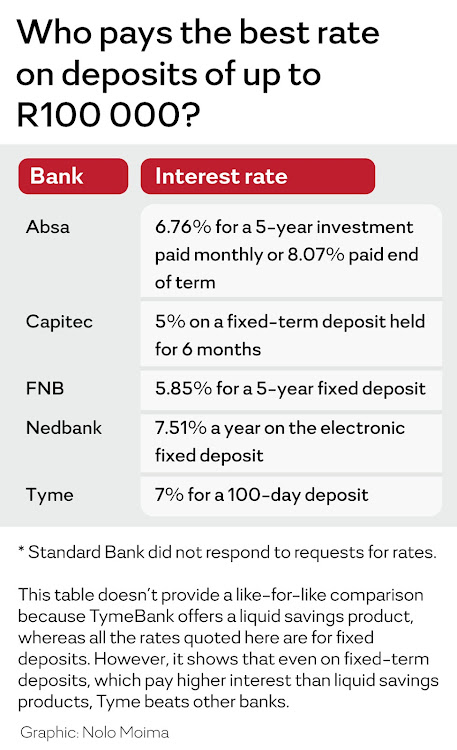 Broadly speaking, there are just two caveats: These rates apply for any amount up to R100,000, meaning you can’t have more than R100,000 in a GoalSave pocket. And you cannot make partial withdrawals. You must take all your money out when you disinvest. This means that to score the best interest rate, you must start saving from scratch and sit tight for more than three months.

Jacobs says the bank has been “stubbornly intentional” on these issues.

“We want to instil the discipline of longer-term savings and the R100,000 cap is there because we don’t want to create a savings instrument for the rich who won’t ever move their transaction account to Tyme.”

Since the bank is not in the business of lending, it’s reliant on transaction fees for some of its income.

To incentivise saving, TymeBank also displays interest earned on a daily basis. Jacobs says the bank has seen customers start with a R50 deposit and log in daily to watch their money grow. Unlike most banks, the interest rate paid on deposits is determined by how long you leave your money in the bank and not by how much you deposit. So if you deposit R10 for 30 days, you earn interest at the same rate as someone who deposits R10,000 over the same period.

One in four customers ready to switch banks amid fierce rivalry

One in four customers are “ready to defect to another bank” and South African banks are increasingly losing our loyalty, the latest survey of banking ...
Business
2 years ago

South Africans appear to be paying no attention to the interest they’re earning on money in their savings accounts, if research by Capitec bank is ...
Business
2 years ago
Next Article