Wheels come off on Up Money as authorities freeze R18.5m in cash, seize luxury cars in pyramid bust

230,000-odd members of meat and grocery scheme likely to lose all money put in and risk being charged for joining a Ponzi scheme

The National Consumer Commission warns that it will be prosecuting everyone involved in the Up Money meat and grocery scheme it has identified as a pyramid scheme. 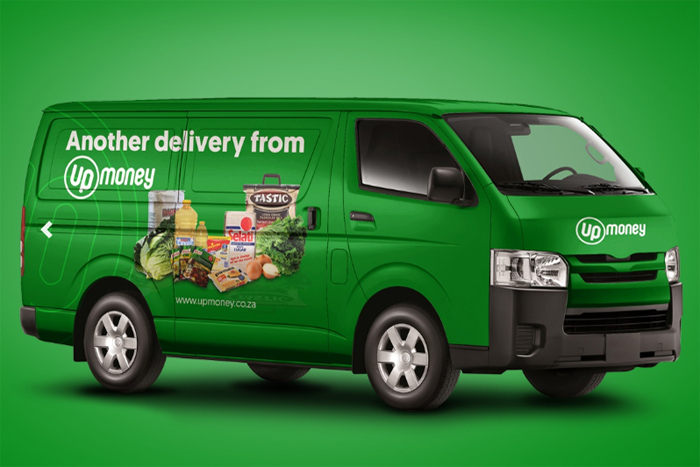 The Up Money Club promises participants on its website that they can "turn twenty rands into groceries and R500, daily". Picture: Up Money website

The Asset Forfeiture Unit (AFU) swooped in on Up Money Club after the authorities identified it as a pyramid scheme, freezing R18.36m held in the FNB account of Up Money, an amount of more than R205,000 held in a business account of an associated company, and confiscating three luxury vehicles.

At a press conference hosted by the National Consumer Commission (NCC) today, acting commissioner Thezi Mabuza said that based on evidence from the NCC and the Financial Intelligence Centre (FIC), the AFU had obtained preservation orders in the Gauteng High Court to freeze the FNB accounts and vehicles.

“The [second] account was identified by the FIC as having received proceeds from the FNB Gold Business account of Up Money to the tune of R3.95m,” Mabuza said.

If you’re among the 230,000-odd members of the Up Money meal and grocery scheme, it’s a pyramid scheme, the NCC warns, and not only are you likely to lose any money you put in, but you’re also at risk of being charged for joining a pyramid scheme.

Promoters of pyramid, multiplication and get-rich-quick schemes are on the lookout for opportunities, she says.

“The NCC noticed trends in the media and was alerted by other regulators to suspicious activities by Up Money in their respective jurisdictions,” Mabuza says.

The modus operandi of Up Money is to use social media to solicit members of the public to be part of the scheme. To receive a promised meat or grocery pack, participants are required to pay a one-off joining fee of R180 and to recruit five new participants.

“As is typical of all pyramid schemes, new participants make up the base of the pyramid and provide funding for participants who were recruited before them and who occupy higher levels in the scheme.”

In addition to monthly meat and grocery packs, participants in the Up Money pyramid scheme are also promised monthly financial rewards, Mabuza says.

It works as follows: Once a cell — made up of the primary participant (participant A) and his/her five recruits — has paid R1,080 to the scheme, participant A gets a monthly food pack and enters level one.

If participant A's recruits each recruit five people, the cell grows to 31 people (25 new recruits plus the top six) and collectively contributes R5,580 to the scheme. This means participant A gets R500 in monthly grocery packs and enters level 2.

If the entire lowest level of the 25 recruits continues to recruit five new members each, 125 new recruits join, growing the cell to 156. Together they will contribute R28,080 to the scheme and participant A gets R3,000 commission and enters level 3.

Mabuza says that in terms of the Consumer Protection Act (CPA) it is prohibited conduct for any person to directly or indirectly promote or join or participate in a multiplication scheme, pyramid scheme or chain letter arrangement.

“The prohibition applies to the initiators, recruiters and all participants.”

Joseph Selolo, the NCC director of prosecutions, says that since the CPA says a person shall not participate, join, promote or enter [a pyramid scheme] “everyone in Up Money has joined or promoted or participated, so everyone has committed an unlawful conduct.

“In our prosecutions, we will be prosecuting everyone. We look for a declaration of prohibited conduct plus a fine. The law states that a fine is 10% of a person’s annual income or R1m, whichever is the greater. So everyone in the scheme will be prosecuted and a fine will be levied. The funds that have been preserved are funds deposited by the participants. Those funds will not be refunded because they participated in an unlawful activity.”

Selolo says that while Up Money has not yet been officially suspended, he says the action taken by law enforcement effectively suspends the scheme. The commission is investigating a number of suspected pyramid schemes. Investigations into six are at advanced stages, he says.

Mabuza says the NCC is “pleading” with the public to be honest in their dealings.

“If you recruit others into illegal activities, think of the relationships that may be severed, the trust that may never be restored, and mostly the economic hardship that others will suffer and from which they may not be able to recover. Is it worth it? Especially at this time when every rand counts and people’s sustainability is threatened.”

She says the telling signs of a pyramid scheme are as follows:

Advocate Ouma Rabaji-Rasethaba, the deputy national director of public prosecutions at the AFU, says law enforcement agencies and regulators moved rapidly in collaboration “to rescue 230,000 people who have been swindled”.

She says that in due course, the matter will be referred to the NPA for charges to be brought against the directors of the two companies.

“We in the AFU don’t have to wait for a criminal case to be concluded. As long as there are reasonable grounds that these are proceeds of crime, we proceed to freeze assets and forfeit them to the state. Where there are victims, the money is eventually returned to the victims. If there are no victims, the money goes to the criminal asset recovery account. Obviously, each case is decided on its own merits,” she says.

Rabaji-Rasethaba says people are under attack by the Covid-19 pandemic and also by criminals — “unscrupulous predators who are cashing in on this pandemic”.

In a letter published on the Up Money website along with FNB's notices of termination of its banking relationship with Up Money Club and director Jude Matsimela, Matsimela lays the blame squarely at the feet of FNB for members not receiving their grocery packs. He describes his operation as a grocery stokvel that started its operations four months ago to “optimise on the opportunity presented by groceries bulk buying”.

The Crowd1 scheme is reportedly using the photos of Springbok rugby players and celebrities “to attract even more gullible people to keep the money ...
Business
1 year ago

Unsavoury companies are making outlandish promises to lure consumers out of their hard-earned money and the Financial Sector Conduct Authority ...
Business
3 years ago

How to tell a pyramid scheme from a real investment

Many people are exposed to get-rich-quick schemes the world over.
Business
3 years ago
Next Article