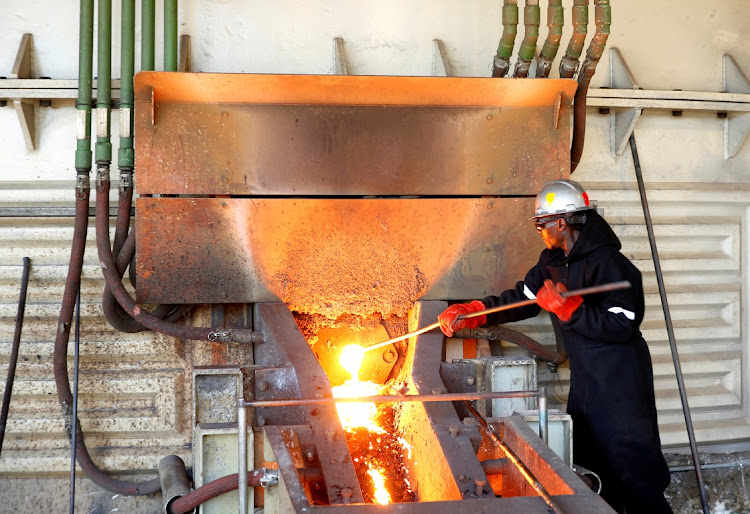 A worker attends to machinery at a smelter plant at Anglo American Platinum's Unki mine in Shurugwi, Zimbabwe, May 16, 2019.
Image: REUTERS/Philimon Bulawayo/File Photo

Global miner Anglo American said on Thursday its overall production for the fourth quarter was flat as a strong diamonds performance countered a 4% fall in copper, for which it expects higher output this year.

After producing 647,200 tonnes of copper in 2021, in line with the previous year, the London listed miner now expects between 680,000 and 760,000 tonnes for this year, driven by its new Quellaveco copper mine in Peru.

However, it warned about possible COovid-19-related disruptions and water shortages in Chile, where it mines the bulk of its copper.

"(At Quellaveco) We are on track and within budget, we mined our first ore in October 2021, and we are expecting our first production of copper concentrate in the middle of this year,” Chief Executive Mark Cutifani said in a statement.

In the three months to December, rough diamond production rose by 15% from a year earlier mostly on increased output from Botswana and Namibia to meet renewed consumer demand.

Iron ore production fell 7% in the fourth quarter, due to unplanned maintenance at its Minas-Rio mine in Brazil, but was up 3% for the year at 63.8 million tonnes.

Amplats to sell Bokoni Mine to African Rainbow Minerals

Anglo American Platinum (Amplats), a unit of Anglo American , said on Monday it agreed to sell its Bokoni Mine in South Africa to African Rainbow ...
Business
5 months ago

Something big is sweeping through the economy – steadily but surely women are claiming their rightful place at the helm of major corporations in our ...
Opinion
7 months ago

Black business formations have hailed the appointments of two black executives to senior leadership positions in the mining sector as a source of ...
Business
7 months ago
Next Article