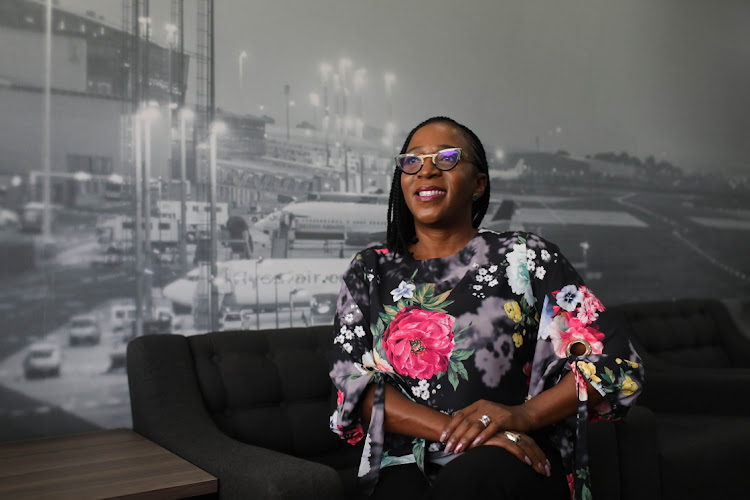 Airports Company South Africa CEO Mpumi Mpofu says SA can anticipate a stronger summer holiday season for both domestic and international passengers than was thought possible at the height of the third wave of Covid infections in July.
Image: Alaister Russell

Airports Company SA's (Acsa) annual results reflect the devastating impact on aviation and tourism of the first year of the Covid-19 pandemic.

Revenue was R2.2bn for the year to end-March, less than a third of the R7.1bn generated in the previous financial year, Acsa reported on Tuesday.

This was only the second loss in the company’s 28-year history.

CEO Mpumi Mpofu said the wide and deep impact of global measures to combat the pandemic have had a staggering effect on airlines, airports and tourism around the world.

Global air traffic in 2020 fell by 65%, amounting to an equivalent of loss of some $125bn (R1.8-trillion) for both aeronautical and non-aeronautical revenue.

Across Africa, traffic declined by 68% resulting in a loss of $2.7bn in airports’ revenues, the company said in a statement.

“These figures represent the low point in terms of pandemic impact because the 12 months involved either complete lockdown or significant restrictions on domestic and international flying,” said Mpofu.

“Since the start of the current financial year on April 1, there has been a continued gradual increase in domestic passenger figures, although off a low base.”

Mpofu said she was encouraged by developments of the past several weeks that suggest an accelerated improvement.

“SA is not only off the UK's red list but most of our key source markets such as North America and within the EU have already removed travel restrictions for flying to and from the country.

Now is the time to tackle boldly a more dynamic phase of pandemic recovery in which we think about the future beyond imagining a return to “normal”.
Opinion
6 months ago

“The increasing pace of vaccinations locally and in other countries, along with the advent of vaccination certificates should encourage continued recovery in cross-border travel.”

Mpofu believes conditions have improved to the extent that if Covid-19 infection rates remain subdued, SA can anticipate a stronger summer holiday season in terms of both domestic and international passengers than was thought possible at the height of the third wave of infections in July.

She said the impact of the pandemic is reflected in every stream of Acsa’s revenue:

To mitigate the situation, Acsa said it initiated a series of funding and liquidity management activities from as early as March 2020 onwards to secure its short-term position and to bolster its long-term financial sustainability.

The company disposed of its 10% shareholding in Mumbai International Airport for R1.26bn, received a loan of R810m from the Development Bank of Southern Africa, and received R2.3bn from the issuance of preference shares to the government.

As a result of the funding initiatives, Acsa said its gearing ratio rose to 23% from 17% the previous year.

“Our responsible approach meant when the pandemic struck, Acsa had already reduced its debt by some R10bn over the previous seven years. The low gearing and asset base of more than R31bn are therefore providing a solid base for recovery over three to five years.”

She said Acsa had also acted to support its long-term financial sustainability. Capital expenditure projects that would have required investment of more than R14bn were suspended in 2020. Operating expenditure has been cut by R1.2bn and headcount has been reduced by 20%.

“Most businesses have faced some very difficult decisions in responding to the impact of Covid-19 over the past 18 months. Acsa is no exception. We are, however, very much aware of the situations of our partners and stakeholders. We are trying as far as we are able to help them to mitigate the impacts that they are experiencing.

“Steps we have taken include moving quickly to introduce relief measures for airlines in the form of deferred payment arrangements and credit reprieves to enable long-term sustainability of our industry. We also provided rental relief for our retailers, many of which are SMEs, by moving from fixed to turnover-based leases,” said Mpofu.

The company is pinning its hopes for an accelerated recovery on the global vaccine rollout and a majority of countries reaching herd immunity.