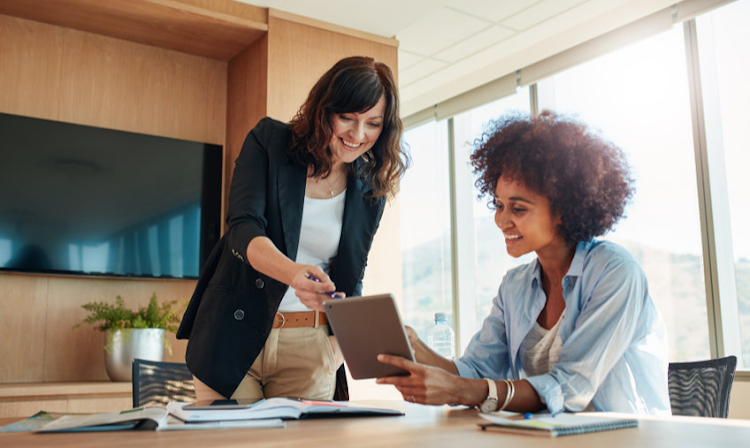 A discussion on women's role in the economy and society at a Sowetan Dialogue.
Image: 123RF/Ammentorp

Understanding a woman's journey is to understand the responsibilities she carries both in the workplace and at home, and to support her ambitions in her professional and personal life.

As Women’s Month drew to a close the Sowetan Dialogues, in partnership with the Gautrain Management Agency (GMA), put the spotlight on women making their mark in what have traditionally been male-dominated industries.

The GMA is an agency of the Gauteng roads and transport department and is tasked with overseeing the operations of the Gautrain, a state-of-the-art rapid rail network in Gauteng. It was established as a first-of-its-sort private partnership project. Gautrain’s broad-based socioeconomic development strategy focuses on both local skills development and capacity building, as well as job creation, the latter including a focus on the development of small, medium and micro enterprises, the sustainable development of marginalised communities and the maximisation of local content.

The goal of the Gautrain project is not only to upgrade public transport but also to improve the province’s economy and improve its citizens' quality of life, explained Siyamthanda Ndlakuse, GMA senior manager for commercial and contracts management. Her portfolio includes oversight of Gautrain’s socioeconomic development obligations.

Sheila Galloway, founder and CEO of the Utho Group

Sheila Galloway, founder and CEO of the Utho Group of companies and an infrastructure structuring specialist who has worked with and advised both private and public sector organisations implementing infrastructure projects across Africa, pointed out that infrastructure developments such as the Gautrain rapid rail network is what drives economies forward. However, in addition to providing services they also need to set themselves socioeconomic development targets.

In SA one of the biggest problems around infrastructure projects traditionally has been a lack of monitoring and evaluating to ensure projects meet their socioeconomic development commitments and obligations outlined at the outset, she revealed.

In this respect, she said, Gautrain has been remarkably successful. Galloway has been integrally involved in monitoring and measuring Gautrain’s development targets since 2007. Not only has the concessionaire had a very positive attitude towards meetings its targets but it has taken on more obligations around women, the youth and disabled than was originally required. “In this respect Gautrain is not a typical organisation,” she said.

Panellist Zanele Potelwa, the first woman to anchor her own show solo on 5FM, says many industries still need to make space for women.

Women play a critical role in SA’s economy. All three the panel members have achieved significant success in their chosen fields, though the industries in which they operate have traditionally been male dominated. They agreed that to get a seat at the table requires that women have the requisite training and qualifications. Once in the workplace they said women need to support and encourage other women in their career journeys. Women need to embrace their femininity, stop comparing themselves to others and instead, celebrate what makes them unique, they said.

Watch the full discussion below:

President Cyril Ramaphosa has called on SA women to lead the struggle for a society that is free of inequality, discrimination, marginalisation, ...
News
1 month ago

Important factors and forces have emerged and evolved, resulting in increased pressure on organisations to make greater progress. This pressure is ...
Opinion
1 month ago
Next Article