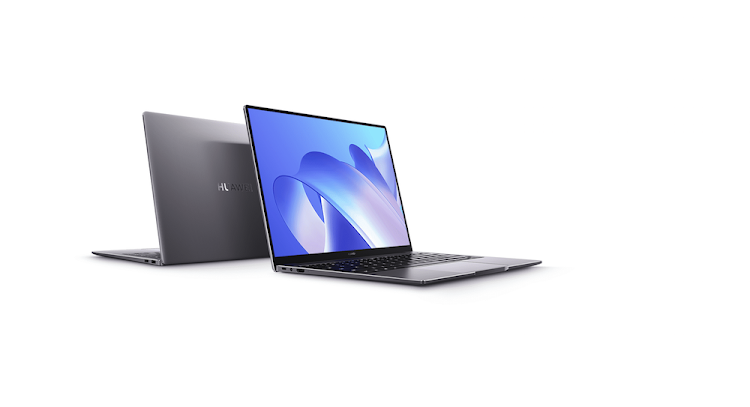 The lightweight MateBook 14 weighs 1.53kg and has a 56Wh battery, which will keep you going for more than a full workday.
Image: Supplied/Huawei

Performance, portability, and price. This is what you need in a notebook and exactly what Huawei has created with its award-winning MateBook series. The new Huawei notebook — the MateBook 14 — is a standout device with a FullView experience. It’s sleek yet super fast thanks to a powerful new 10th Generation Intel Core processor on the inside.

The MateBook 14 has a touch-enabled display with a 90% screen-to-body ratio and 3:2 aspect ratio. More screen is always better, especially when the edge-to-edge display has a crystal clear 2K resolution with a contrast ratio of 1,000:1 that supports 100% of the sRGB colour gamut. But that’s not where it ends with the MateBook 14, multitouch support means you can pretty much operate it as you would your smartphone. Great features include being able to use finger gestures to perform simple things such as taking a screenshot, which almost feels like magic; and the Eye Comfort Mode, which filters excessive blue light and alleviates eye fatigue. Is there a 14-inch notebook out there with a better display than the MateBook 14? We’re yet to see one.

No mouse? No problem

One of the first things you’ll notice when opening up the MateBook 14 is that it doesn’t have a built-in camera ... at the top of the screen. Instead, you’ll find a recessed webcam hiding in the keyboard. With one press, it pops up and you’re good to go. (Now if you’ve ever seen someone cover up their webcam because they’re worried about privacy, this innovative detail removes that concern altogether.) First appearing on the Huawei MateBook Pro X, this type of webcam is ideal because you won’t accidentally leave it on and the FullView display isn’t compromised.

Once you get past that pop-up webcam, you’ll be impressed by the MateBook 14’s comfortably large clickpad (which has passed Microsoft’s certification and supports Windows 10 gestures) and high-performance backlit keyboard. The power-on button, which sits at the top of the Mate 14’s keyboard, doubles up as a fingerprint reader so if you can’t stand typing in a password or code every single time you turn on your machine, this is a game-changer.

It’s finally time to say goodbye to extra cables and third-party apps to transfer files. Working seamlessly across smart devices shouldn’t be difficult and with Huawei Share, multiscreen collaboration is not only possible, it works beautifully. With a second Huawei device (or any smartphone running Android) you’ll be able to do things such as drag-and-drop file transfers and even take calls through the notebook. This also means you edit files on your phone using your laptop screen and open mobile apps on your notebook screen. It all sounds a little far-fetched but with the MateBook 14, it’s a reality.

Even though the lightweight MateBook 14 weighs 1.53kg and is only 15.9mm thick, it has a 56Wh battery, keeping you going for more than a full workday. We’re talking being able to play local 1080p videos for 14.7 hours, your regular workload for 13.6 hours, or power 10.7 hours of continuous web browsing.

It also comes with a small power adapter (160g) that will give you three hours of use after 15 minutes of charging. The adapter doubles as a charger and will also work with any USB Type-C device while supporting Huawei SuperCharge.

And then there are the MateBook 14’s array of connectivity options — multiple USB ports (including one USB Type-C port) and comes with an HDMI port and a headphone jack.

Along with that 10th generation Intel Core processor (and Intel’s Wireless-AC 9560 Wi-Fi module), the MateBook 14 has 16GB dual-channel RAM. If you’re the type of user that has endless browser tabs open at once, this spec is for you. Plus the powerful NVIDIA GeForce MX350 graphics card runs anything in HD with ease.

The high-performance PCIe SSD (solid state drive) keeps the speed of the MateBook 14 snappy and all of this is kept cool with Huawei’s high-speed second-generation Shark Fin 2.0 fan. In fact, the MateBook 14 has seven temperature sensors to monitor how hot the notebook gets in real-time for a more stable (and somewhat softer) performance.

Made with sandblasted aluminium alloy, the space grey MateBook 14 feels as good as it looks. It’s soft to the touch and its understated design aesthetic is minimalistic. You simply wouldn’t expect such a good experience from an ultra-slim notebook but Huawei has made it possible. It doesn’t matter if you’re working in the office, remotely, or planning a post-Covid-19 business trip, Huawei’s MateBook 14 is a standout device that’s perfect for professionals who require power and uncompromised portability.

This article was updated on June 29 to reflect the correct pre-order amount.