After a struggle, rabbit farmer now coining it 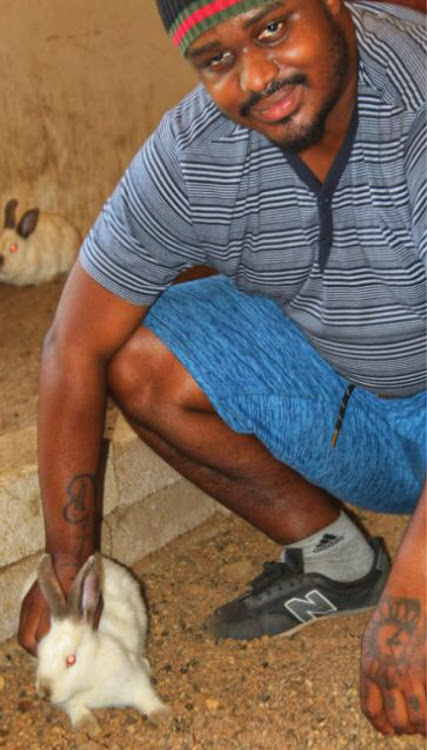 Rabbit farmer and owner of High Five Productions Orateng Ntsime, 30, has gone from farming four rabbits in 2016 to being a sustainable farmer, breeding 50 rabbits in four months.

Ntsime from Moruleng village in Rustenburg, North West, sells California rabbits that are consumed as meat. He also sells Netherlands Dwarf rabbits that can be kept as pets.

He grows the rabbits by feeding them fruit, vegetables and specialised rabbit feed. “It takes about four months for a rabbit to grow from being a kitten to a size where it is ready to be consumed or kept as a pet,” says Ntsime.

He adds that his clients include butchery owners and followers that he has gained from marketing his business on Twitter and Facebook.

“One of the earliest challenges I faced in the business when I started was attracting customers outside my village. I started reading up on how to use social media to promote my business online. The business has taken off from that point. Currently I deliver to clients in Johannesburg every month,” he says.

Ntsime says his rabbit meat is popular among those hosting braais and customers who are going on safari.

Ledwaba wants to be meat king of kasi via his hampers

Experience in beef production and packaging, and knowledge of meat consumption trends in black communities, prompted Wally Ledwaba to get into the ...
Business
11 months ago

As a small-scale farmer who produces less than 10,000 rabbits, Ntsime is not required to get approval for farming the rabbits.

Ntsime advises small-scale farmers looking to enter the sector to research the type of farming they would like to venture into.

“To succeed as a rabbit farmer, you must first know the rabbits that you are farming more than the business. Rabbits, like any other animals, get sick and need special attention.

“You have to observe, learn and understand behaviour because when something is wron,g that is how you will see it in the early stages,” says Ntsime.

• This article was originally published in the GCIS Vuk'uzenzele