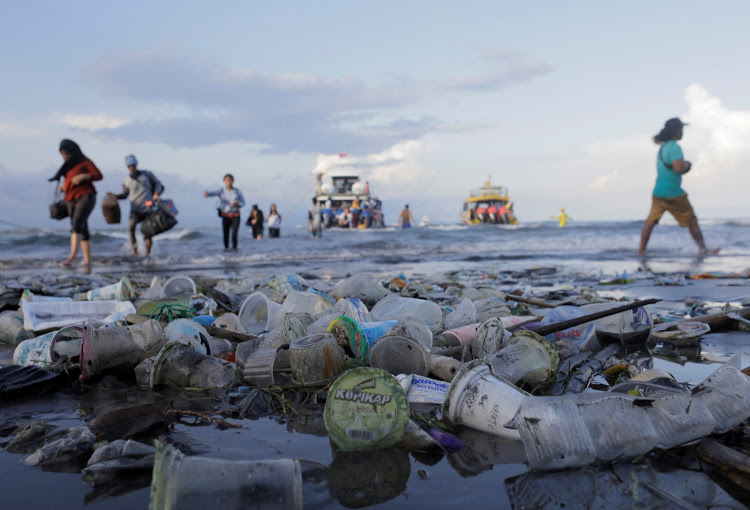 Of the 380 million tons of plastic produced globally each year, at least eight million tons end up in the sea.
Image: Reuters/Johannes P. Christo

SA is on a drive to prevent litter from destroying our river and ocean environments, while also creating jobs in the process.

Every year, up to 250,000 tonnes of rubbish enters the oceans around SA, mainly by being carried down to the sea in rivers. This rubbish cannot only harm birds, mammals and fish, but can also damage ship propellers and drive away tourists.

Various initiatives are now under way to stop this flow of rubbish, mainly through the use of litterbooms, which are large plastic pipes that are stretched across the surface of rivers, catching harmful plastics before they can get to the sea.

An organisation called The Litterboom Project (TLP) has worked hand-in-hand with the City of Cape Town and municipalities in KwaZulu-Natal since 2017, setting up seven litterbooms in some of the major rivers that flow into the ocean.

TLP founder Cameron Service explains that an important part of the project is to empower local community members and give them opportunities to earn an income.

“At the core of the project is empowering local teams, who have to live with the waste, to both clean up the rivers in their area, as well as to provide opportunities to work and provide for their families,” he says.

Litterbooms are situated in places where they can collect the most rubbish. This rubbish is then collected for recycling by the TLP team.

In another initiative, the national department of environment, forestry & fisheries is joining forces with NGOs such as Coastwatch and Durban Green Corridors in KwaZulu-Natal to stop the flow of marine litter using litterbooms in five river systems.

During the two-year project, communities will help clean out the booms on a daily basis.

“Through increased litter collection and community-led waste sorting and recycling, the department will reduce litter generation at its source, thereby lessening the amount of pollution that reaches the ocean,” says department project manager Yazeed Petersen.

“One possibility being considered is the idea of ‘swap-shops’ where community members can trade the recyclable litter for essentials. This will further encourage communities to become involved in litter collection.”

Waste collector Gumede Nkosana says that swap-shops will help him to provide for his family.

- This article was originally published in the GCIS Vuk'uzenzele

Outa wades in on the sewage polluting Cape Town lagoon

The Organisation Undoing Tax Abuse (Outa) has asked for a meeting with the City of Cape Town over sewage pollution in the Diep river and Milnerton ...
News
2 years ago

South Africans could do more to invest sustainably

South Africans think more about personal service, online access and the fees they will pay than they do about making sustainable investments.
Business
2 years ago
Next Article