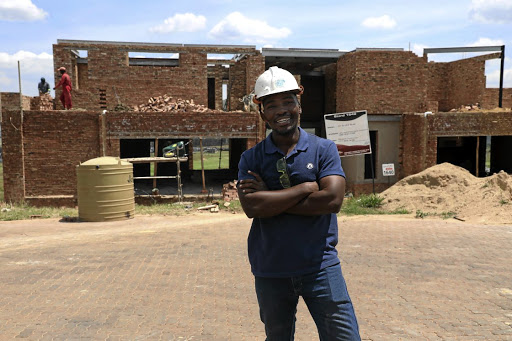 Civil engineer Maemo Machaba and his company make slabs that are used in multiple storey houses such as the one pictured
Image: Thulani Mbele

An engineering trio have developed technology which is the first of its kind to build double- and triple-storey houses without using pillar support.

Maemo Machaba, his mentor Professor Alex Elvin and his former classmate at Wits University, Landry Monga, have used technology called the fluted floor system which allows for more levels to be added onto a house without pillar support.

"The magic is in the geometry of the floor we create. Traditionally, when floors are added we have to put pillars in the house to make sure the floor doesn't collapse. With our technology we can put the floor up without support that needs to go through the house," said Machaba.

Machaba, 28, said this has allowed them to put in a second floor in a home without the family having to move out.

"This also saves time because as long as there are pillars inside the house, builders can't do anything else until they are taken out.

"But with our technology builders can finish the job a bit faster," he said.

Social entrepreneur Nhlanhla Ndlovu has fast become a star in the construction industry with his idea of replacing backyard shacks with decent ...
News
1 year ago

A traditional second-storey floor takes about 28 days to stabilise, while theirs takes only three days. The floor is made out of steel and is designed in a zig-zag shape that allows for it to need less support.

"Two people can put this up, so it is lightweight which means we don't even need a crane to put it together."

Machaba, who was born in Pankop, a small village at the west end of Mpumalanga, said his mentor Elvin originally came up with the idea for one single project but Machaba was convinced it could be done in other homes.

So convinced was he about the potential of the technology that he asked to be dismissed from his contractual duties from the bursar that paid for his civil engineering degree.

"We are still in discussion on how I will pay them back."

"I went to talk to other engineers and architects and it became pretty clear after that that we should start our own company," Machaba said.

This is how their company Aura Entle was born, with Machaba at the helm. They have since won an award for innovation at the Steel Institute's 2018 Steel Awards .

"Our product is patented and we see ourselves as an innovative company with a growing list of new and patented products."

He said they purposefully made the fluted floor system labour intensive to create jobs.

"Although it is labour intensive, it's also important to make sure it's not too heavy for the people who will be putting it together."

*Aura Entle's chief civil engineer Prof. Elvin is registered to all the relevant bodies such as the South African Institute of Civil Engineers , the Engineering Council of South Africa and the National Home Builers Registration Council.