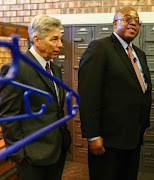 Sasol joint CEOs Bongani Nqwababa and Stephen Cornell have resigned due to cost overruns at the Lake Charles Chemicals Project (LCCP) in the US, the chemicals company said on Monday.

This comes while the company’s share price has lost more than a third of its value so far in 2019.

A probe into the cost surge at the project concluded that there had been insufficient experience within the project leadership team in executing mega projects, and insufficient oversight at the executive level, though no evidence of criminal conduct has been uncovered.

Nqwababa and Cornell, who took up their positions in July 2016, have agreed to an “amicable mutual separation” to ensure a culture of accountability, and to restore trust in the group, Sasol said.

Fleetwood Grobler, executive vice-president for chemicals, will take up the role of CEO with effect from November 1.

Sasol has twice delayed its financial results for the year to end-June, to probe cost overruns at the project.

Sasol opted not to pay an interim dividend to end-June, having paid R12.90 previously. It further warned it may also not pay a dividend in its full year as it seeks to strengthen its balance sheet, partially due to the cost overruns.

Earnings before interest, taxes, depreciation and amortisation (ebitda) fell 45% to R9.7bn due to lower chemical prices and LCCP costs.

The board’s review of the project found that the primary responsibility for the shortcomings lay with its former project management team, which engaged in conduct that “was inappropriate, demonstrated a lack of competence, and was not transparent”.