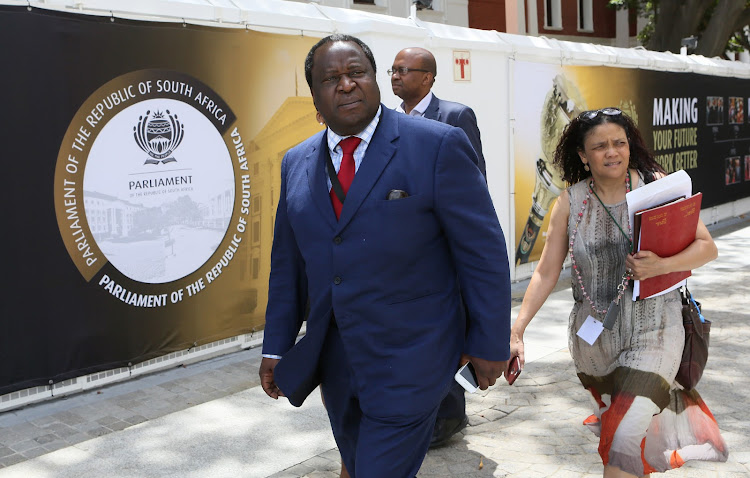 Despite a tough economic environment‚ government is planning to spend R5.8-trillion in the next three years‚ with the bulk of the money going to education‚ health and social development.

Finance minister Tito Mboweni‚ tabling his budget in parliament on Tuesday‚ told MPs that over the next three years government would spend R1.2-trillion on education‚ R717 bn to improve the ailing public health infrastructure‚ and about R900bn on social development or social grants.

Mboweni said the department of basic education would receive R30bn to build new schools and maintain existing schooling infrastructure. An additional R2.8bn would also be channelled towards eradicating pit latrines at more than 2‚400 schools.

In the next three years‚ an amount of just over R111bn would be set aside to fund 2.8-million "deserving students from poor and working class families to obtain their qualifications at universities and technical and vocational and training colleges”.

"In health‚ we need simple‚ effective interventions. We need more doctors and nurses. R2.8bn has been reprioritised to a new human grant and R1bn for medical interns. R1bn has been added to wages of community health care workers to R3‚500 per month.

Turning to the issue of housing and human settlements‚ Mboweni introduced the "Our Help to Buy subsidy" for first time buyers to acquire housing.

The subsidy scheme would be piloted at a cost of R950m in the next three years.

Mboweni would also‚ in the next two years‚ introduce two conditional grants to the tune of R14.7bn through the reprioritisation of funds.

The money would be "for informal settlements upgrading‚ which will enable these households to have access to basic amenities”.

On land reform‚ government would support 262 "priority land-reform projects" in the next three years‚ at a cost of R1.8bn.

Another R3.7bn has been budgeted to assisting emerging farmers seeking to acquire arable land to farm.