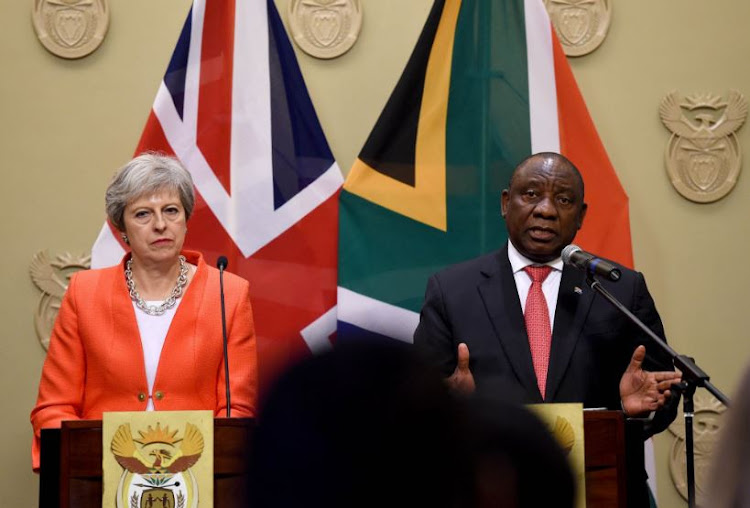 British Prime Minister Theresa May has assured the South Africa that her government’s looming exit from the European Union will not affect trade relations between the two countries.

May made these announcements at a joint press briefing with Ramaphosa at the presidential office of Tuynhuys in Cape Town as part of her first working visit to South Africa.

The British Prime Minister added that her government was determined to make the United Kingdom the number investor in the African continent from among G7 countries.

As of last year‚ the UK was South Africa’s 6th largest global trading partner with total trade at R79.5-billion.

A video of British Prime Minister Theresa May dancing during her visit to Cape Town has gone viral.
Entertainment
3 years ago

With the UK set to exit the EU trade bloc by March 2019‚ May's government on Tuesday signed an agreement with countries in the Southern African Customs Union (SACU) to ensure trade relations with the UK are not affected once "Brexit" happens.

"We've agreed that as the UK prepares to leave the EU‚ we must think about how to grow that trade in the future.

"So‚ today‚ as you've just witnessed‚ we've signed the joint statement with SA‚ Mozambique‚ Botswana‚ Namibia‚ Lesotho and Eswatini to enjoy the provisions of the region's current trade deal with the EU continue after this agreement no longer applied to the UK.

"This important step will provide the strong foundations on which we can build closer trade and investment partnership in the future that brings even greater benefit for both sides. "My ambition is for the UK to be the number G7 investor in Africa by 2022."

Ramaphosa said he welcomed the UK's commitment to help achieve his $100-billion investment campaign‚ which was due to be discussed with British companies travelling with May at investment roundtable in Cape Town later on Tuesday.

The investments are targeted at sectors such as manufacturing‚ agro-processing‚ infrastructure development‚ mining‚ energy and tourism‚ among others.

Theresa May and Cyril Ramaphosa to 'cement economic ties'

British Prime Minister Theresa May is expected to arrive in Cape Town on Tuesday to kick off a three-day trip to sub-Saharan Africa.
Business
3 years ago

"We also confirmed our wish that the negotiations on the United Kingdom’s exit from the European Union are concluded in a manner that restores stability to economic and financial markets.

"We further welcomed the regular engagements between the trade Ministers of the members of the Southern African Customs Union and the United Kingdom on a future trade agreement‚" said Ramaphosa.

The South African head of state added: "We are encouraged on the signing today of the Joint Statement on the UK‚ SACU and Mozambique Economic Partnership Agreement‚ which significantly advances these engagements.

"We also held discussions on various peace and security challenges on the African continent and internationally. We have noted with concern the continued instability and conflict in some of our sister countries. We have reaffirmed our commitment to working together in pursuit of peace‚ stability and development on the continent."

May is on a three-nation African tour ‚ with South Africa her first stop. She was set to visit Kenya and Nigeria as part of the visit.