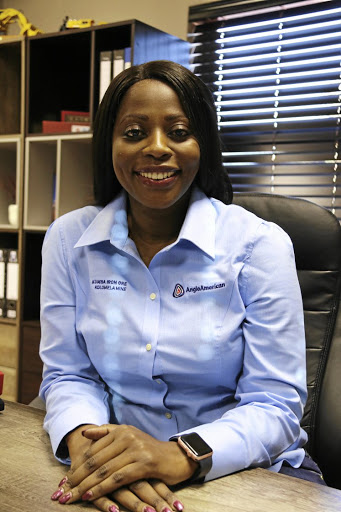 Mandlakazi Semane is climbing up the corporate ladder in what was previously a male-dominated industry.
Image: Supplied

Mandlakazi Semane wants to inspire the next generation of female talent to go into the male-dominated world of mining.

When growing up in Keiskammahoek, a town in the Eastern Cape, she did a diploma in analytical chemistry, and her working life started in the pharmaceutical industry before she joined Kumba in 2002.

"At home we did not have much but we were grateful that we had a roof over our heads and we never really went to bed hungry. However, that was not enough for me as I studied very hard to change our situation. I always knew I was destined for bigger things in life," Semane said.

"My top priority at the moment as
plant manager is to maintain an unwavering focus on Anglo American's commitment to safety and zero harm.

"It is very important to ensure that the work space is safe. I also manage processing operations and stakeholder engagements."

When Semane started her mining career at Kumba about 16 years ago, she gained her first insight into the company's role as a niche supplier in the global iron ore market. She then moved to the Sishen mine in 2009 where she managed the distribution teams for both the Sishen and Kolomela mines at a time when
Kumba railed a record 41million tons of iron ore.

Like any other job, Semane's job comes with its own challenges.

"Kolomela is currently working on a process which will allow the mine to extract more iron ore out of what was previously regarded as waste. That requires one to lead cross-functional teams and the biggest challenge is aligning the human material resources and making sure that the system is ready," Semane said.

"I have learnt that there is always someone with more experience and this is an area where peer coaching is effective.

"My job is dynamic and no day is the same. I am grateful for the opportunity to contribute to Kumba's strategic agenda by adding value, while also inspiring others, especially women."