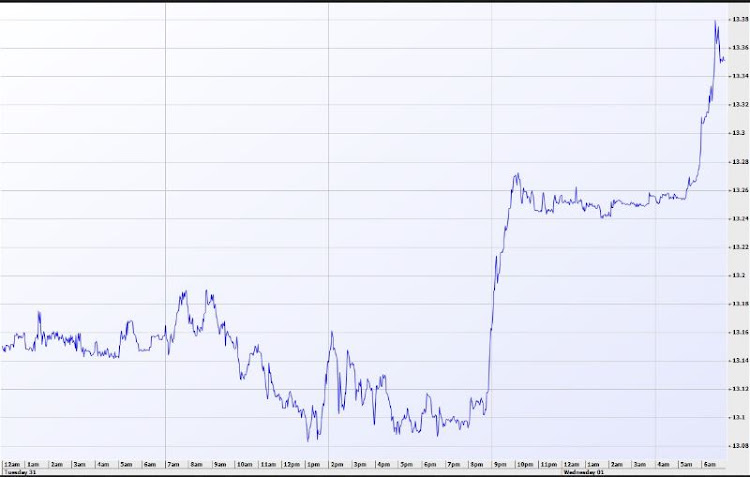 The rand took a late-night tumble against the dollar on July 31.
Image: IRESS

The rand extended losses on Wednesday morning‚ following an overnight rout after the ANC’s surprise decision to seek to change the Constitution to expropriate land without compensation.

“It is with uncanny ability that SA’s politicians deal the beleaguered economy yet another blow just when it appeared as though things were settling down‚” said Wichard Cilliers‚ head of dealing & director at TreasuryOne.

The rand had been on a steady recovery‚ touching a two-month high of R13.08/$ early on Tuesday‚ before tumbling to lows of R13.39/$ early on Wednesday morning‚ in a decline that began late at night after the news broke.

The JSE opened flat on Wednesday after the rand weakened more than 30c against the dollar following the announcement by President Cyril Ramaphosa ...
Business
2 years ago

The ANC made the decision at a two-day lekgotla held in Irene‚ outside Pretoria. The party is set to make a submission to this effect at the parliamentary hearings on land that are under way.

“Whilst the market was shaping up for a break below the R13/$ handle‚ this news has dealt the rand a blow and in all likelihood the news will not be well received‚” Cilliers said. “This latest move is once again believed to be politically motivated ahead of the national elections next year and is aimed at neutering the political stance of the EFF.”

“Dollar/rand responded immediately to the news and there is a high probability that it will weaken further. If communicated poorly‚ this holds the potential of turning into a game-changer depending on how seriously foreigners view this threat to property rights more generally.”