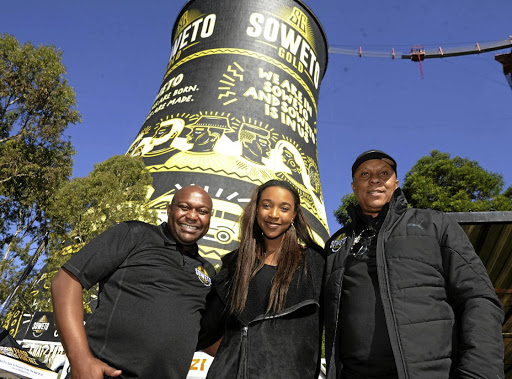 Soweto has inspired many and produced notable personalities, and one is tempted to say there's is no place like it.

And for that reasoning, Pietermaritzburg-born Ndumiso Madlala, 38, was so enamoured of this township that he felt it was the right place to set up shop there.

Madlala's shop is in fact an industrial concern, Soweto Brewing Company, which is located at the Ubuntu Kraal in Orlando West. His flagship brand Soweto Gold, a lager, was inspired by the Johannesburg gold rush of 1886.

"It was a no-brainer which township it would be. Soweto is a world-famous township. It's a place that even if you're not born there you feel like you're home," Madlala said.

Before going mainstream, the father of two first ventured into craft beer business.

"I noticed a gap in the market, that there was absolutely no brewing operations in the townships where most of the beer-loving folk reside. That's when I saw an opportunity to put the first micro-brewery in the township."

Madlala found his passion for brewing while studying. He'd been accepted into a chemical engineering course and was studying via a Sasol bursary when he was selected to study at a university in the Netherlands.

While there, he studied brewing and his passion was noticed by his professors who offered him an opportunity to work on a new project which involved working with pioneering beer technology.

"It turned out to be a very exciting project. It came with its own challenges. The project I worked on replaced the beer powder with membranes. It was always available in water. I was working on how these membranes would react with beer and how long they'd last."

Armed with this new knowledge and a year's work experience as a chemical engineer, Madlala worked with SAB as a process engineer, using the membrane technology he's studied overseas.

On qualifying as a brewer, he was given the responsibility of looking after SAB's Brutal Fruit plant in Krugersdorp. Brutal Fruit is brand of fruit-flavoured alcoholic coolers.

A few years later he moved to Heineken SA, a subsidiary of world famous Dutch brand.

He was part of the team that built the brand's plant in Sedibeng, south of Johannesburg.

After three years there he joined SAB Miller Africa, overseeing 25 breweries in 14 African countries. "We were going into new territories, setting up new breweries. I can mention South Sudan as one of the countries we set up a new operation, [Tanzania and Nigeria being the others].

"I felt like I had enough experience in setting up breweries, so I came back home in 2013 and pursued my dream, the Soweto Gold."

Madlala and his business partner Joe Schmidt started off using a brewery in KZN as they tested the market.

During this time he received customer feedback and found that his initial lager was too sweet, so he had to tone it down a little. His brewery was finally set up in June 2014.

"Starting up a brand-new business is very difficult. We had our fair share of difficulties when we started. One of them is that you have to accurately calculate your capital expenditure. There were a few things we miscalculated."

In the same year, 2014, they were voted the Best Craft Beer by the league of beers in Cape Town, and in 2016 he won the Township Entrepreneur of the Year Award from the Gauteng department of economic development.

Rumours made rounds last year that Soweto Gold is now owned by Heineken, but Madlala could only admit to Heineken buying a "significant stake''. He would not reveal the value of that stake, save to say he and Schmidt still ran the operations.

Since the partnership with Heineken, Soweto Gold embarked in a massive marketing drive, spearheaded by new 500ml cans and 750ml bottles, targeting the township market.

"Soweto Gold for me means triumph," he concluded.