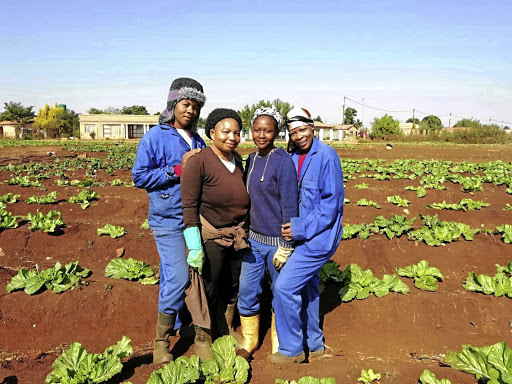 For Isabella Twala, the need to uplift her community and herself through farming was more important than pursuing a career in finance.

Twala, Esther Shirinda, Mbali Rakgalakane and Tseleng Motshello are the four women at the helm of Greater Soshanguve Agricultural & Primary Cooperative, a small-scale farm in the Pretoria north township.

"After resigning as a portfolio manager at Absa in the small business division, I decided to use the skills and experience I garnered to pursue my dream as a farmer," Twala said.

She said they registered their farm in 2015, but only managed to secure land and start work on the farm last year.

"We struggled to get land but that did not deter us. We concentrated on sorting out our paperwork and administration. We spotted a dumping site in Soshanguve and applied to enter into a lease agreement with the City of Tshwane in May 2017," Twala said.

The women have been planting and producing Swiss chard spinach, beetroot, mustard spinach, sweet potatoes and hubbard squash on the two-hectare piece of land they have transformed into a farm.

This has not come without challenges.

"We have a number of challenges, but we won't let them get us down. We do not have a fence around our farm and because of this, people with livestock allow their animals to graze on our piece of land," Twala said, adding that they also had to contend with thieves who target their produce.

"When we arrive in the mornings we see footsteps and see that they have stolen from us and it's heartbreaking," she said.

Twala said their biggest challenge was the lack of adequate irrigation and access to water while developing another portion of the land they have been allocated.

"We are using hosepipes to water the plants because we don't have a choice. It's difficult because we can't efficiently cover the ground that we need to cover."

Greater Soshanguve Agricultural & Primary Cooperative is expanding slowly but has already made a difference in the township. Shirinda said they wanted to get women and youth interested in the agricultural sector.

"We have about three students who help us when they have time. We want them to gain experience and understand that agriculture is not only about livestock and planting produce but also that they can find different paths within the sector."

Shirinda said a distinguishing feature about them is that they are organic farmers who do not use pesticides, fertilisers and chemicals in their products.

Their farm was recently shortlisted in the Township Entrepreneurship Awards where they stand to win R6-million.

"If we win we will be able to erect a fence around our farm and install a proper irrigation system," she said.