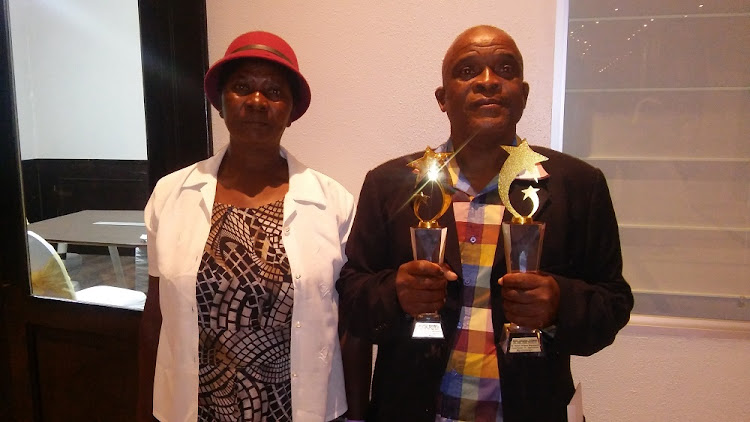 Lindiwe and Rodgers Mngomezulu of Bushbuckridge, Mpumalanga. Rodgers, a mechanic at the Mpumalanga department of agriculture and rural development, was crowned the best public servant in the country in the fifth edition of the Batho Pele Awards.
Image: Penwell Dlamini

In 1988‚ Rodgers Mngomezulu took a job that many people take for granted.

But decades later he has beaten some of the best and the brightest in the land and been rewarded for his efforts.

On Friday‚ Mngomezulu was announced as the overall winner in the fifth edition of the Batho Pele Awards in Boksburg‚ Ekurhuleni. He also scooped another prize for being the general worker of the year.

As the best public servant of the year‚ Mngomezulu beat financial managers‚ medical practitioners and other highly skilled government workers.

He received his award from the Deputy Minister of Public Service and Administration Chana Pilane-Majake. Mngomezulu‚ 60‚ of Bushbuckridge‚ is a general worker in the Mpumalanga department of agriculture‚ rural development and administration.

His job is to fix tractors‚ bulldozers‚ excavators‚ dump trucks and water tanks. He started as a tractor driver but later began to fix all sorts of equipment at the department. He picked up his mechanical skills at home‚ practising on his brother’s fleet of minibus taxis.

“Every time‚ my brother’s combi would break down‚ I would try to fix it myself. That is when I learned how to fix things‚” he said.

In 2004‚ Mngomezulu was promoted to a mechanical worker. With the passion he showed for his job‚ the department took him for training in 2015 to hone his skills.

Mngomezulu’s day begins at 6.45am and he does not a have knock-off time.

“I can’t tell what time I knock off. It depends on the amount of work that I am doing. Sometimes I finish at 8pm‚ sometimes 9pm‚” he explained. “What makes Mr Mngomezulu different is that‚ while he works for the department‚ he goes out of his way to fix tractors and agricultural machinery for farmers on their own farms‚ at no cost to them. He just wants farmers to go to their fields as quickly as possible‚” one of the officials in the department explained at the awards ceremony.

“There was a scenario where a bulldozer was broken and the department had appointed a service provider who wanted R500‚000 for the work but Mr Mngomezulu asked to have a look at the machine. He diagnosed the problem and recommended which parts had to be bought at a price of about R50‚000‚ meaning he saved the department about R450‚000.”

But for Mngomezulu that was just another day at work. His wife Lindiwe‚ with whom he has 10 children‚ has often wondered why he is so committed to excelling at a job that many people would take lightly.

“My wife sometimes used to complain. She asked why I work so hard and arrive so late from work and yet I don’t earn a lot of money for all my efforts. I told her she should not worry because I work for God and the nation‚ not just my employers‚” Mngomezulu explained. On Friday‚ the DJ on the decks played President Cyril Ramaphosa’s new song for public servants Thuma Mina (Send Me) by the late Hugh Masekela as Mngomezulu watched on‚ having beaten all professionals in the land to take the highest honour on the night.

He had one message for other public servants.

“When you work for the community‚ you must give your all. If it costs you to go the extra mile‚ you must do it and not compare what you do with the amount of money that you earn‚” he said.