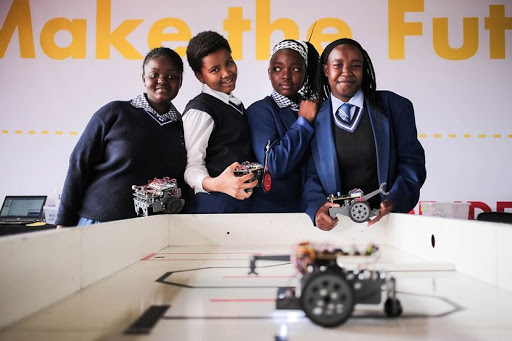 22 October 2017. The all girl robotics team from Alexandra High School (From Left:) Matebogo Thobejane, Agreeneth Kgasago, Kopano Kgatla and Tshegofatso Mampuru pose for a picture with the racing robots they built before competing in the second annual AfrikaBOT robotics competition at the Zwartkops Raceway in Pretoria. Picture: Alaister Russell/The Times

Alexandra township might in the near future produce a robot with cooking skills.

That is the vision of a Grade 10 pupil who took part in this year’s AfrikaBOT robotics competition‚ held on Sunday at the Zwartkops International Raceway in Centurion.

Tshegofatso Mampuru and three schoolmates built a small sensor-driven robot that drove through a maze without any remote control.

The challenge for participants was to have their robot going through the board faster than other competitors. The Alexandra girls’ robot was not fast enough on the day‚ but taking part in the competition has motivated Mampuru.

“I want to build a robot that can prepare meals and assist with cleaning in the house. This will give people more time to relax and do other things. I have started doing my research and I am confident that one day my dream will become a reality‚” said Mampuru from Alexandra High School.

A total of 16 pupils from Alexandra High participated in the competition. Teams started assembling their robots in March. Alexandra High teacher Frank Phalane said more pupils were interested in taking part in the challenge.

“Unfortunately we had to be represented by 16 pupils due to budget constrains‚ but the majority of our pupils showed interest. As a school‚ we are now looking at how we can bring in more science and maths projects similar to this one‚” Phalane said.

More than 40 junior and senior Gauteng schools took part in the challenge‚ hosted by the University of Johannesburg Faculty of Engineering and the Built Environment Technolab.

“The robots are world class and could hold their own in overseas competitions. For now funding is our main challenge but we would love to see this competition being adopted by institutions in other provinces because pupils have embraced it. It makes learning fun‚” he said.