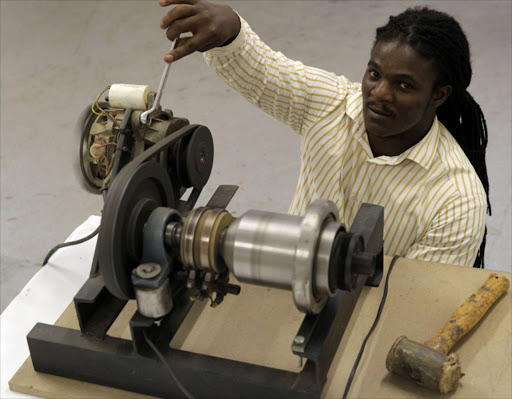 Inventor Melusi Ntuli went from begging for funding to starting his own small business to developing his own electric engine.

Seven years ago, Ntuli's application for start-up finance was rejected and this paved the way for innovation that required little financial support.

The Vryheid-based inventor said the rejection turned out to be a blessing in disguise as it gave him the opportunity to explore a concept that resulted in him developing an engine that runs without fuel.

Ntuli drew a sketch of the car engine and conducted research on different types of engines, electronic motors and alternators.

The engine is powered by a battery that is recharged whenever a car is in motion.

It is also not dependent on electricity. "The car uses two batteries which work parallel, but are independent of each other. One battery produces 12 volts, while the other produces 380 volts," Ntuli said.

"The power from the 12-volt battery is used to fire up a motor which fires up the alternators. The alternators will then produce power amounting to 600 volts to recharge the 380-volt battery, which is responsible for running the car engine.

"I then put together the engine and went to the University of KwaZulu-Natal and I met with two professors of mechanical and electronics and electrical engineering who encouraged me to do the project.

"However, they were concerned how the engine is going to be powered up. I went to the Durban University of Technology and I was encouraged to consider using a formula similar to that of how a gun fires a bullet," he said.

The road to the invention was not smooth. Ntuli studied industrial engineering, but abandoned the degree in 2010 due to financial problems.

Ntuli's parents are unemployed, but received an income by running informal businesses. "I went into the driving school business and I used to rent cars from other driving school owners to transport clients to Volksrust in Mpumalanga, from Durban.

"This is due to the fact that Volksrust had fewer driving licence applicants than Durban, and there was a growing demand from people who wanted to get their driving licences quicker.

"As my business was gradually growing, I decided to head to financial institutions for funding but they turned me down," he said.

Ntuli is part of the Department of Science and Technology's Grassroots Innovation Programme that is implemented by the Council for Scientific and Industrial Research. The department's chief director of innovation for inclusive development, Nonhlanhla Mkhize, said the programme seeks to identify, document and offer appropriate assistance to innovators and inventors without academic backgrounds.

The inventors are also provided with entrepreneurship development skills to market their inventions commercially, with an aim to create jobs, she said.

Ntuli is discussing the future of his projects with the department.