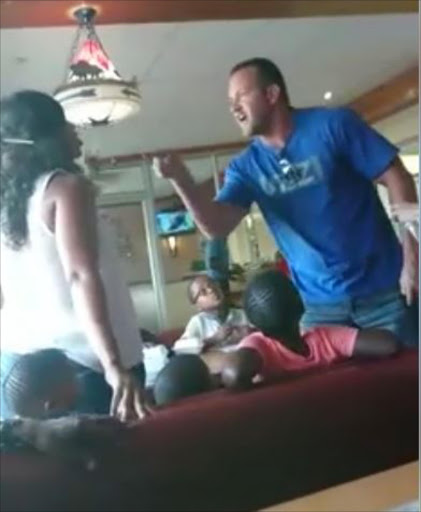 Spur CEO Pierre van Tonder accused Solidarity of trying to score “political points” on Thursday after the union’s chief executive penned an open letter saying he had “lost his appetite” for the restaurant franchise.

Spur restaurants have faced a backlash from Afrikaans customers who have boycotted certain restaurants in protest at the way a confrontation – between a white man and a black woman — was handled.

The man was caught on video threatening to give the woman a “p**s klap” during an argument over their children’s behaviour at Texamo Spur at the Glen Shopping Mall in Gauteng in March. He was subsequently banned from all Spur restaurants.

Solidarity chief executive Dirk Hermann‚ in a letter to Spur chief operations officer Mark Farrelly‚ said that loyal white customers were tired of being bullied and portrayed as conservative right-wingers.

“I have lost my appetite to eat at Spur‚” said Hermann. “I am not boycotting Spur. A boycott is too small as if this is just an isolated Spur-incident that deserves a slap on the wrist from the public. This is about white people who are fed up with being bullied‚” he wrote.

He accused the restaurant franchise of dismissing a community of loyal customers.

“Spur you messed up. Say you are sorry about it.”

But Van Tonder replied‚ saying the boycott appeared to have a specific political agenda. “I am surprised to see a trade union leader implicitly calling for a boycott and embrace an uninformed narrative without considering the effect such a boycott will have”.

He said that the franchise stood by its decision and would not give into pressure by “an angry mob who chose to interpret our decision in terms of race and to punish us based on this assumption”.

I refer to your open letter published on Maroela Media on 23 May in which you make some contentious statements about Spur Corporation and its handling of the situation at Texamo Spur. You addressed this to my Chief Operations Officer‚ Mark Farrelly who acted as spokesperson for Spur.

I am surprised to see a trade union leader implicitly calling for a boycott and embrace an uninformed narrative without considering the effect such a boycott will have on the jobs of South Africans of all walks of life who rely on Spur franchisees for survival. I am disturbed by your dismissal of the offer made by Mark to view the video footage we used to arrive at our decision about the incident under discussion. You say this invitation is missing the point; I fail to understand how comprehensively informing yourself about all relevant factors could be construed as missing the point.

Spur did not release all footage at its disposal into the public domain as we believe it would be unethical to expose the actions of children who could easily be identified. Even with their faces blurred‚ their parents’ identities are known‚ and it would expose children to unwarranted public scrutiny. In line with the Constitution‚ laws about the protection of minors‚ and the regulations of the Press Code we will do our utmost to protect children from the public glare‚ especially on social media.

I would have expected that you‚ as a trade unionist with influence in the Afrikaans community‚ would have informed yourself thoroughly before expressing support for a boycott of this kind‚ especially as this campaign is hurting the very Afrikaans people you claim were hard done by Spur. In fact‚ your union Solidarity has members in the franchises against whom you are encouraging a boycott. Their livelihood is at stake now‚ but instead of acting in workers’ best interest‚ you seem more interested in scoring political points from the hate campaign against Spur orchestrated by Front Nasionaal on social media.

It is rather telling that the only communication Spur has received from you to date on this issue was an offer soliciting advertising in Solidarity’s member magazine‚ a fact you failed to mention in your letter to Mark. It can only be seen as a very cynical move to undermine a company in public while at the same time asking them to pay for advertising to rectify the “negative criticism” they are receiving.

You also neglect to mention that Spur has in the past hosted events on behalf of your charity Helpende Hand. In fact‚ our Tennesse Spur franchise in Kroonstad will host an event on your behalf to raise funds for the personnel of the Lace Diamond Mine on 30 May 2017‚ and we encourage people to support this event. If the boycott is successful in closing down this and other branches‚ it is not only the franchisor and his employees who will suffer but the community at large. We are happy to provide you with a list of local charities supported by all our franchises countrywide that will show you that we invest in all South African communities and have never discriminated against any race or ethnic group.

Your accusation that Spur misread the white discourse‚ misses the point that Spur does not respond to issues by applying the facts through a lens of racial profiling. We would not have been voted South Africa’s favourite restaurant so many times if people of all races did not feel welcome in our restaurants. Our active community involvement means that millions of Afrikaans people also benefit from Spur’s donations and investments. A good example is the more than R500 000 Quinton Jansen of our Mexico Spur in Canal Walk Spur has donated to enable the rugby stars of Hoërskool Stellenberg to tour to Italy last year. Money which will simply not be available if the boycott succeeds in closing down Spur franchises.

If Spur really did not care for our Afrikaans customers‚ you would have been able to give many more examples of such “discrimination“. The fact that you keep harping on one incident about which you admit you don’t know the full truth‚ undermines your argument and confirms our assertion that this boycott has been blown out of proportion to serve a specific political agenda.

Spur did not and never will base our decisions in cases like this on the race of the individual. We viewed the footage and based our decision simply on the facts available us. We believe we made the right decision and stand by it notwithstanding the attacks by an angry mob who chose to interpret our decision in terms of race and to punish us based on this assumption.

We accept we made mistakes in dealing with this issue‚ and we have started a process to learn how to improve our response to such matters in future. We also believe that Spur has a duty to our customers and the wider South African community to open up the incident and the factors surrounding it to calm‚ considered inspection. This is why we have asked Prof. Elmien du Plessis of the NWU Faculty of Law to convene an independent panel of inquiry. We have assured her that we will accept and implement the recommendations of the panel. We will be inviting interested parties from all walks of life to make submissions‚ and we extend an invitation to you to make your case in front of the panel for consideration.

To understand why some franchisees in specific areas were more affected than others‚ we researched the demographic context and established a link to historically conservative political constituencies. This data also helped us to make sense of the racist comments on social media and political leanings of the groups driving the boycott. Journalists who investigated the incident and the racist responses and threats online characterised the boycott as a right-wing boycott.

We can agree on one thing‚ Spur by your admission is not being punished for its actions but is instead being punished by a segment of the white populace for reasons that have nothing to do with Spur itself. It has nothing to do with the people working for Spur who are being subjected to threats of violence merely for working at Spur. I think you will find that the boycott will not yield winners. People will have lost their jobs and families and communities that could have benefited will be poorer and more polarised.

We believe when the dust has settled‚ the public will see that Spur acting swiftly and decisively to an incident of violence against a child was the right thing to do and that such action is justified regardless of the race of the perpetrator and victim.