Ford to inspect every Kuga sold for safety - Consumer Commission 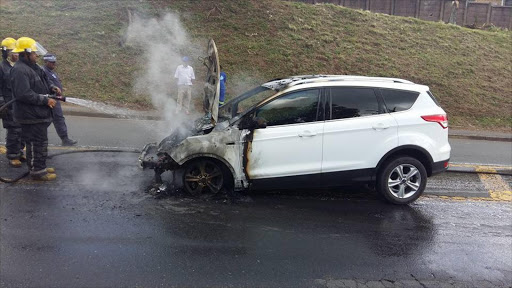 Ford SA has agreed to inspect every one of the Kuga family SUVs it’s sold in South Africa‚ the National Consumer Commission (NCC) said on Tuesday.

This follows a meeting between the embattled car maker and the commission last week after more than 20 Kugas caught fire this year.

“The company undertook to conduct safety inspections on all Kuga utility vehicles that have been sold in the country. The inspections will form part of precautionary measures instituted at the behest of the NCC after serious allegations of engine overheating on the Kuga vehicle surfaced in the media in recent weeks‚” the commission said in a statement.

It added that it had not to date received any complaints from consumers about the Kuga vehicle.

It said that at the meeting‚ which was chaired by NCC Deputy Commissioner‚ Thezi Mabuza‚ Ford SA filled the body in on two separate investigations it was conducting.

“The company has vowed to expedite its investigation into engine overheating incidents and will report back to the NCC with its findings by end of February 2017.”

The NCC said an initial meeting which was scheduled for Monday 12 December 2016 was postponed to last Wednesday to allow executives and technical experts from Ford to travel respectively from Europe and the United States to voluntarily appear before the NCC.

“Meanwhile‚ Ford has undertaken to alert all Kuga owners to take their vehicles to a nearby Ford workshop or dealership for a free safety inspection. The company has urged consumers with related concerns to contact its Customer Service helpline on 0860 011 022 for advice or assistance‚” the NCC said.

“The NCC has preliminarily enlisted the services of the Motor Industry Ombudsman and the National Regulator for Compulsory Specifications to assist with the matter.”

Both entities were also represented at the meeting with Ford.

“The regulatory group will independently review all concluded investigation and related reports from Ford to determine the best possible way to proceed with the matter.”

It’s unclear whether the latest undertaking by Ford will be enough to stave off a possible class action lawsuit after yet another Kuga burst into flames at the weekend‚ allegedly after technicians assured the owner the vehicle was safe to drive in Durban.

The Times has revealed that as many as 23 Kugas have caught fire this year. Some of the affected owners are considering a class action lawsuit‚ including the family of a man who died after being trapped inside his burning vehicle.

A Facebook page called “Ford vehicles burning” has been set up for victims of Kuga vehicle fires to share their stories.

Ford told The Times earlier this month that it was not considering a recall of the Kuga. Ford has recalled tens of thousands of similar models‚ named the Escape‚ in the US and China citing the risk of engine fires. – TMG Digital