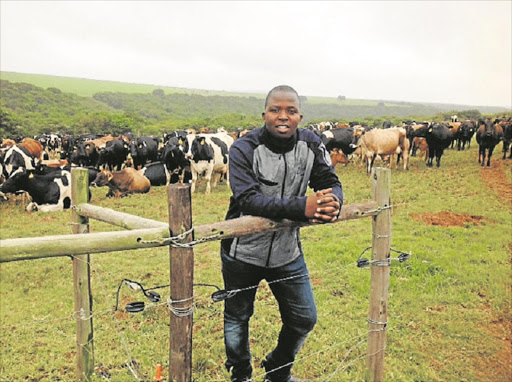 A young Alexandria farmer who turned a rundown farm into a major dairy producer in less than 10 years, has scooped a prestigious agricultural award for his hard work and vision.

When Tshilidze "Chilli" Matshidzula, 29, was appointed Little Barnet deputy farm manager nine years ago, it had less than 50 dairy cows and was another failing example of government attempts to transform the agricultural sector by giving land to black rural communities.

Fast forward almost a decade and the farm now has 549 cows that produce 11000 litres of milk a day and has just made history by becoming the first black managed and owned commercial farm to win a top agricultural award in more than 50 years.

"Winning the prestigious Mangold Trophy has given us something that money cannot buy. It is a huge confidence boost for everyone involved with the farm and really creates a sense of achievement," Matshidzula said.

According to Matshidzula, when he first arrived at Little Barnett as a 19-year-old agricultural student with big dreams, it was failing miserably, thanks to squabbles between the beneficiaries who owned the place in Eastern Cape.

He said some of the people initially involved had no clue how to run a commercial farm or commitment after being roped into the deal with hopes of making fast, easy cash doing nothing.

"To succeed in farming, you need to be involved with people who have a passion for it."

A self-confessed city slicker hoping to get practical experience as a junior manager, Matshidzula said he initially encountered hostilities because of his age and the fact he was from another province.

These included incidents with panga-wielding workers.

Issues were finally resolved and the farm started employing younger people, who had no agricultural experience, to work instead of old hands who were set in their ways and resistant to new ideas and technology.

Although young in years, Matshidzula already had some dairy farming experience thanks to a stint in Cookhouse where he worked for seven months and met well-known dairy farmer Walter Biggs.

Mentored by Biggs, who later formed a company with Matshidzula and two other trusts of beneficiaries at Little Barnett, the farm rapidly started to become a major commercial enterprise with the young Tshwane University of Technology student at the helm.

Spotting Matshidzula's potential, Biggs set up a once-in-a-lifetime opportunity where he would supply all the movable assets to the farm, with the land owned by his protege and other beneficiaries.

BCC chairman Simon Matthews yesterday said Little Barnet was chosen because "it depicted the criteria of the trophy: conservation of natural resources, improvement in resource utilisation and vast improvement of efficiencies and financial profitability".

"The turnaround in the farming business has been truly amazing, from a 50-cow unit to 500 cows, all in a matter of a few years.

"It is a historical moment, because Chilli is our first black recipient of this prestigious award... it is richly deserved, and hopefully the first of more to come."