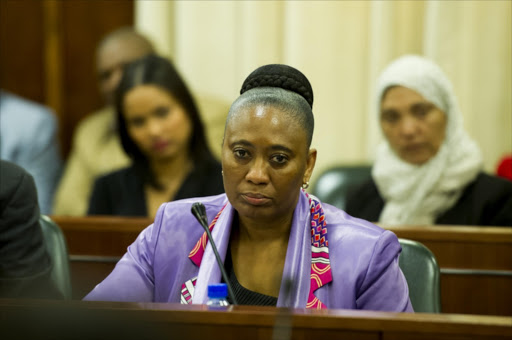 After months of speculation, the office of the ANC chief whip on Thursday confirmed the resignation of the chairwoman of Parliament’s portfolio committee on communications, Joyce Moloi-Moropa.

Moloi-Moropa had found herself in an uncomfortable political corner last year when parliamentary legal advisors consulted by the committee expressed the view that Communications Minister Faith Muthambi had condoned the unlawful axing of SABC board members.

Muthambi refused to accept the legal opinion, describing it as “very wrong”.

At the time, Moloi-Moropa would not confirm persistent media reports that she had asked the ruling ANC to relieve her of her duties in Parliament.

ANC chief whip Stone Sizani said in a statement issued late on Thursday that her resignation would take effect at the end of the month.

“The Office of the ANC Chief Whip confirms the resignation of the chairperson of the parliamentary communications portfolio committee, Comrade Joyce Moloi-Moropa, with effect from 29 February 2016.

“Comrade Moloi-Moropa requested the ANC leadership a while ago to release her from Parliament to focus on her enormous responsibilities as SACP Treasurer on full-time basis, as she felt her split focus on both party and parliamentary roles did neither of them justice.”

It said her post, as well as that of Paul Mashatile, the former chairperson of parliament’s standing committee on appropriations, would be filled soon.

“Both Comrades Moloi-Moropa and Mashatile have discharged their parliamentary responsibilities with distinction and dedication, and we wish them well.”