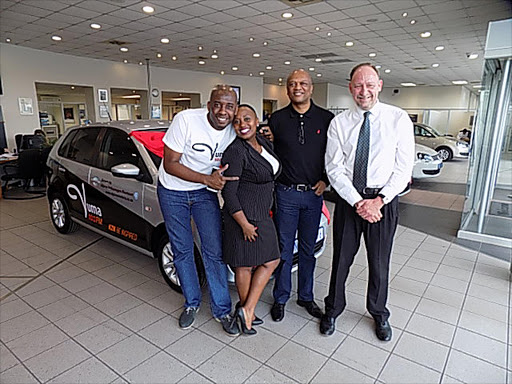 Vuma 103 FM is on a winning wicket this week, they are the only radio station in the KwaZulu-Natal Province to show an increase in audience numbers.

The radio station has shown the highest growth of all 38 commercial radio stations across the country, which is confirmation that they have established their unambiguous X-Factor appeal to the KZN province, with the recent RAMS figures reflecting a listener audience growth of 123% year-on-year, and 17% diary-on-diary.

To add to the excitement, they have also joined forces with Alpine Volkswagen Pinetown and are the proud recipient of a sponsored vehicle; a stunning brand new 2015 Polo Vivo Hatch.

Tony Mallam, Managing Director for Vuma FM says, “We are excited to join forces with Alpine Motors and look forward to a long-term partnership with them.”

Vuma 103 FM has evolved as a radio station, and this is evident in the on-air product offering.  With an exceptional line-up of prominent, seasoned presenters, coupled with a commitment to constantly improving the line-up for the listeners, this is just the beginning of a noteworthy chapter in the KZN commercial radio landscape history book.”

The station takes pride in its solid inspirational, family and community values, and its innovative approach to programming, events and activations. This is coupled with its extensive community involvement, all of which are guided by its intrinsic understanding and personalised approach to the target audience.

The slogan, “KZN BE INSPIRED” is what defines the station. The commercial radio station broadcasts from studios in the heart of the trendy Umhlanga New Town precinct to a footprint of over six million people across the KZN Province.