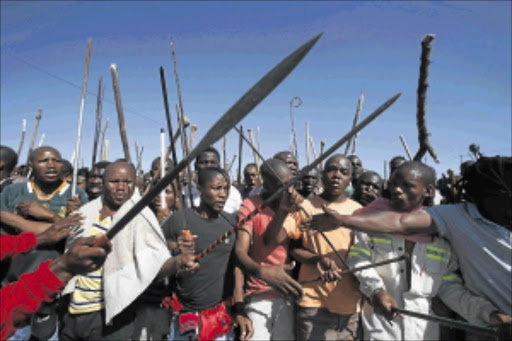 FILE PHOTO: A Marikana general dealer said he ran out of pangas and axes because there was a marked increase in their demand by Lonmin mineworkers. The Farlam Commission of Inquiry heard that some of the mineworkers just snuck the weapons in their trousers and jackets Photo: Sydney Seshibedi

Trade unions were not aware about job cuts at Lonmin mines in Marikana outside Rustenburg in North West, they said on Monday.

"We were waiting for something like this to occur. We are not surprised."

He said Lonmin indicated during wage negotiations that it was assessing some of its shafts that were not making profit.

"We were told during negotiation that retrenchment are imminent. The company has not formally consulted with us [Solidarity] with its plan to cut jobs. We only picked it up on the news," he said.

However, late on Monday evening, Lonmin denied there were retrenchments coming.

The dominant union at Lonmin, the Association of Mineworkers and Construction Union (Amcu), said earlier it was not aware of the planned job cuts.

"We are not aware of this," said national treasurer Jimmy Gama.

The National Union of Mineworkers said too it was not aware of the impending retrenchment.

"We have not been consulted about it. There has not been formal engagement," said general secretary Frans Baleni.

He said the retrenchments might be triggered by the long strike in the platinum sector.

The strike ended on June 24 when they accepted a three-year wage deal that will increase salaries by R1000 in the first and second year of the agreement and R950 in the third year.

Amplats announced on July 21 that it planned to sell its Rustenburg and Union mines.

"The intention to exit Union mine [in Limpopo]... has already been announced, and it has now been concluded that Rustenburg and our Pandora JV asset will be better placed in the hands of new owners who would be able to provide the focus and capital for the operations to have a successful future," CEO Chris Griffith said in a statement at the time.

The company broke the news in a statement, reporting vastly reduced profits for the six months ending June 30, 2014.

Griffith said the dominant feature of the first half of the year was the strike, during which 40 percent of Amplats's production was not in operation.

On August 16, Amcu president Joseph Mathunjwa told thousands of mineworkers that Amplats plan to cut jobs was not linked to the recent wage strike in the platinum sector.

"We submit that the magnitude of this decision is not one that can be taken in a month, it has always been coming," Mathunjwa said at the time.

"As a union we are prepared to discuss the plans of the company to protect the interests of our members in this transition process."

The SABC reported late on Tuesday that Lonmin had denied planning to cut 5700 jobs at its operation in Marikana.