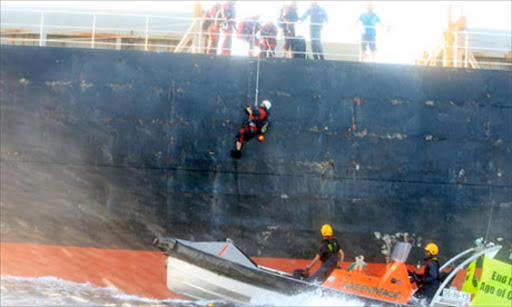 Six activists from conservation group Greenpeace boarded a coal carrier on the outskirts of Australia's Great Barrier Reef Wednesday calling for an end to exports of the fuel.

The group of six, who come from five major coal exporting and consuming nations in the Asia-Pacific being targeted by Greenpeace, sailed out to the MV Meister to stage a protest on the bow urging an end to the "Age of Coal".

"Australia's coal exports are the nation's greatest contribution to climate change and plans are under way to roughly double the volume of coal we export," Greenpeace said in a statement.

"Yet every tonne of coal that is exported will return to us as climate change: bushfires, heatwaves and drought."

Australia is among the world's worst per capita polluters due to its reliance on coal-fired power stations and its exports of the fuel to Asia.

The Greenpeace group, who hail from Australia, India, the United States, China and New Zealand, took a boat out to the coal freighter from the Rainbow Warrior and climbed aboard with a ladder to unfurl a banner.

They approached the MV Meister, which is bound for South Korea, just outside the Great Barrier Reef World Heritage Area and have vowed not to budge.

"We have no idea how it's going to play out at this stage," said protester Emma Giles from on board the Panama-flagged ship.

"Either the coastguard will come and get us, or we end up in Korea."

The reef's heritage status has come under scrutiny, with UNESCO last year warning it could be declared at risk if action was not taken to protect it from a gas and mining boom and increasing coastal development in the region.

Ports on the Barrier Reef coast currently export 156 million tonnes of coal per annum (mtpa) and there are plans to expand that to 953 mtpa within the next decade. By 2020 an estimated 7,000 ships will traverse the reef every year, up from 5,000 in 2010.

"In the clear absence of political leadership to address this problem, Greenpeace is stepping in to take immediate and peaceful action," the group said.