Staff to get slice of rail agency, Prasa 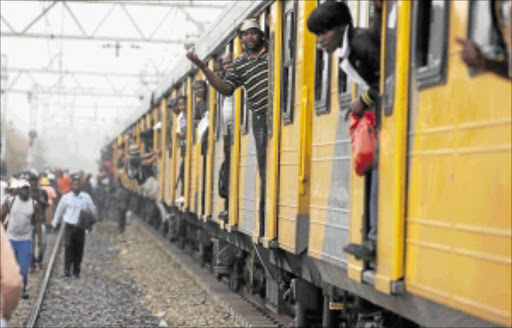 RAIL and bus transport and property parastatal Passenger Rail Agency of South Africa has revealed that it will partner with the National Empowerment Fund to identify black people to benefit from its R40-billion rolling stock investment programme.

Prasa has earmarked at least 30% of the R40-billion allocated by the government for the next 10 years for black economic empowerment groups.

The rolling stock programme involves the acquisition of 7,224 Metrorail coaches in an effort to meet passenger demand over the next 20 years.

The money will also be used to upgrade and construct new rail infrastructure such as depot facilities and signalling.

Speaking to Prasa's 300 managers in Centurion yesterday, group chief executive Lucky Montana explained how the 30% would be split.

"From this 30%, 3% will go to an educational trust, 10% to an active equity trust for suppliers, and the remaining 10% will be channelled towards the employees (excluding management) of the joint venture," he said.

Prasa was recently criticised by the Black Business Council for deciding to allocate 30% of the contract value to BEE companies.

Montana said he had recently met with the council leadership and gave a breakdown of how the programme's BEE component would be shared..

Touching on the importance of discipline, Montana said the company was to discipline employees who were responsible for its property investment arm performing below par.

"The level of fraud in this business is amazing," said Montana.

He said Cres should generate about R1-billion a year.

"Since Cres was created two years ago, we invested R556-million in 2010 and R590-million last year. However, we can't even collect a third of the R1-billion of the projected revenue," he said.

Montana said Cres would in the next three months expel the employees who had been named in the forensic audit.

"If employees have been named in the forensic audit but we don't have enough evidence to fire them, we will reach a separation agreement with them," he said.