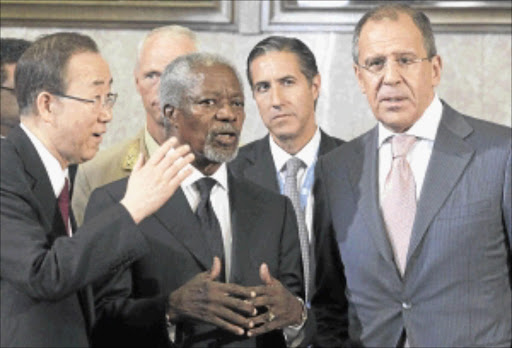 Delegates from around the world are in New Yorkfor the start of month-long UN-hosted negotiations to hammer out the first-ever binding treaty to regulate the global weapons market, valued at more than $60-billion (R490bn) a year.

Arms control campaigners have said one person every minute dies as a result of armed violence and that a convention is needed to prevent illicitly traded guns from pouring into conflict zones and fuelling wars.

Most UN member states favour a strong treaty. If they get their way, all signatories would be charged with enforcing compliance to any treaty by companies that produce arms and with taking steps to prevent rogue dealers from operating within their borders.

They said conflicts in Syria and elsewhere cast a shadow over the talks, reminding delegates of the urgency of the situation.

"In Syria, Sudan and the Great Lakes of Africa, the world is now once again bearing witness to the horrific human cost of the reckless and overly secret arms trade," said Brian Wood, international arms control and human rights manager at Amnesty International.

"Why should millions more people be killed and lives devastated before leaders wake up and take decisive action to properly control international arms transfers," he asked.

There is no guarantee the July 2 to 27 negotiations will produce a treaty, let alone a good one.

In February, preparatory talks on the ground rules for this month's talks nearly collapsed due to procedural wrangling and other disagreements.

In the end, the United States and other countries succeeded in ensuring the treaty must be approved unanimously, so any one country can effectively veto a deal.

But the treaty may not be doomed if that happens. Wood said nations that support a strong pact could bring a treaty to the 193-nation UN General Assembly and adopt it with a two-thirds majority vote if there is no consensus in July.

"It is an absurd and deadly reality that there are currently global rules governing the trade of fruit and dinosaur bones, but not ones for the trade of guns and tanks," said Jeff Abramson, director of Control Arms.