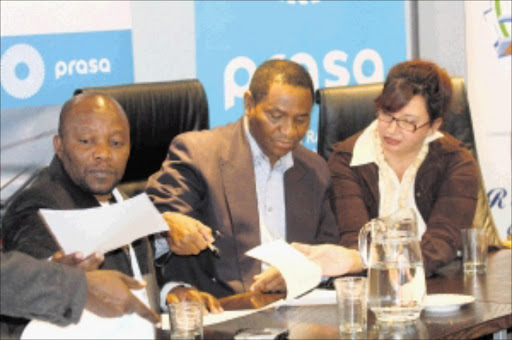 Ezrom Mabyana President of Satawu, Zenzo Mahlangu with Nerine Kahn CCMA director during the signing of the wage agreement between PRASA and Satawu at the CCMA offices in Johannesburg, also announcing the end of a three week strike. Photo by Bafana Mahlangu

The CCMA has published new Arbitration Guidelines which will come into effect on 1 January 2012. The main purpose of these Guidelines is to promote consistency in the decision-making of commissioners in arbitrations dealing with dismissals for misconduct.

"This means that CCMA users will know more or less what to expect in an arbitration process, whether it is heard in a big metropolis like Johannesburg, or at a Department of Labour venue in a rural area of Mpumalanga, such as eMakhazeni," said Eugene van Zuydam, National Senior Commissioner Dispute Resolution.

About eighty percent of the CCMA's cases are unfair dismissal disputes. Most of these cases involve the dismissal of workers for misconduct.

The Guidelines are intended to guide arbitrators on how to deal with misconduct arbitrations, but they will also be of great assistance to users in preparing for and presenting a case at arbitration.

The Guidelines place emphasis on the narrowing of issues in dispute at the commencement of the hearing, and parties can expect commissioners to be more robust in this regard.

Essentially, taking time at the beginning of an arbitration to identify what is in dispute and what is not, assists the parties because it is only necessary to lead evidence on issues that are in dispute. For example, if it is not in dispute that there is a rule in the workplace, and that breach of the rule normally warrants dismissal, it may only be necessary to produce evidence on whether the employee in fact committed the misconduct in question.

The Guidelines also cover the factors that are taken into account when an arbitrator assesses substantive and procedural fairness, as well as remedies.

This is not only useful for the arbitrator making the decision, but also for users in presenting evidence.

For example, if reinstatement is not reasonably practicable, evidence must be presented to demonstrate this.

The procedures followed by employers in misconduct disciplinary hearings still tend to be very formal and legalistic. The Guidelines stress that procedural fairness entails only five key aspects:

The message is clear that disciplinary procedures should be kept simple, said van Zuydam.

More broadly, the new Arbitration Guidelines will assist to create some certainty as: