End of the Dubai dream for many workers 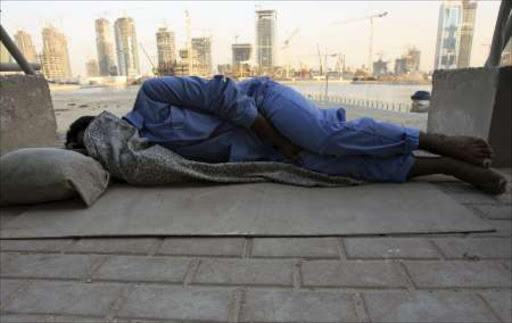 The workers have no money for food, but they also cannot leave. They have not been paid for months and their passports were confiscated long ago

SHARJAH, United Arab Emirates — Under an unforgiving sun, South Asian workers stir giant pots of rice, their only food, in a barren patch of desert 80km from a gleaming Dubai skyline built over decades by migrant labour.

Abandoned by employers who left the United Arab Emirates after the Dubai economy soured, the men cannot afford to stay, but they also cannot leave. They have not been paid for months and their passports were confiscated long ago.

These workers, and thousands like them stranded in business hub Dubai and neighbouring emirate Sharjah, are the human collateral damage of the world economic crisis that crippled Dubai’s building frenzy.

“We’re stuck here while our families back home in India face a dark future with no money. I don’t have a single fils (cent),” said Mohan, a worker whose employer, a labour supply company, fled the UAE two months ago.

The UAE transformed itself in a half century from a small Gulf Arab fishing and trade centre on a desert coast into a regional business and tourism hub on the back of cheap foreign labour.

But now, as companies contract or fold all together, some employers are slipping out of the country, leaving work camps filled with stranded migrants with nowhere to go.

The gas and electricity have now been cut to Mohan’s work camp in Sharjah, which houses 350 technicians and drivers. The men have no air conditioning — critical in a desert country where summer temperatures hit 47 degrees Celsius (116 Fahrenheit).

Stories like those of the Sharjah camp are growing more common, said Saher Shaikh, a well-off Pakistani expatriate who runs charity efforts to provide the workers food and medicine.

“They are promised pay, and told to keep working,” she said.

But the management flees, work stops, and wages never come.

The UAE has faced criticism from rights groups who say companies go unpunished as they flout laws to ensure workers are paid on time and their papers not withheld. Others say the government’s task is daunting because of the speed at which some companies pulled up stakes.

“The government is trying its best. It’s hard to stop this exploitation of workers,” said Ebtisam al-Kitbi, a UAE analyst.

She said the UAE now required companies to set up automated payment through banks to ensure workers get their wages.

The workers in the Sharjah camp say they have not been paid monthly wages of about 800 dirhams ($217) in six months to a year, and their families are going hungry. At their employer’s office, the phones ring and ring, but no one answers.

Stuck in Sharjah, the men wait, crammed into camps of indistinguishable, crumbling housing blocks like worker bees in a honeycomb. A brown trail of sewage oozes between buildings, its suffocating stench spreading nausea and fever among the men.

The Ministry of Labour, which did not reply to requests for comment, has been slowly answering workers’ calls for help: It sent home around 1,500 labourers in June and paid their wages.

But months have passed as Mohan and his coworkers in Sharjah wait for help from the Labour Ministry and Indian Embassy, who have retrieved their passports and promise to send them home.

Daintily picking through the litter-strewn Sharjah camp in silver shoes and a flowing cloak, Shaikh listens as men flock around her to vent their frustrations, some holding back tears.

“We just sit and sleep, and have too much time to worry. We just want to go back to India,” one man in the crowd pleads.

For the past four years, Shaikh, 33, has been making regular visits to dozens of camps, bringing donated food and hygiene products. But it was only in the past year she began to find workers completely stranded and in dire need, she said.

“With the economic climate the way it is now, so many companies are doing this,” she said. “The camp right next door is in the same situation. That’s how common it is. It’s next door. We don’t even have to find them.”

Dubai’s 6-year boom that fuelled construction of the world’s tallest building and palm-shaped islands slammed to a halt in 2008 after the global financial crisis. Millions of dollars of construction projects were slashed or put on hold.

The faltering economy can be particularly hard on those unpaid workers with hefty balances outstanding on loans they took to pay recruiters to bring them to Dubai for work.

“That’s why we see suicides happen,” Shaikh said, noting that the suicide rate had spiked since last year. “They think if they kill themselves the loan sharks will leave their families at home alone. But they don’t. They’ll still go after them.”

Many workers, promised unrealistic salaries, take loans of $2,000 to $4,000 to pay recruitment agencies to bring them to the UAE, even though the law here bans the practice.

In boom times, labourers quickly paid back loans through overtime.

Now, the cranes and drills lie idle and the men, without even their base wages, say their families are suffering.

“My family is hungry,” Mohan said. “I had two kids trying to get a degree, and now what? There is no money to study.”

Shaikh blamed the companies for the workers’ plight. “It’s 100% their fault,” she said. “They could have afforded to send the men home fairly. Instead they’ve left them here to rot, while they’re far away driving their BMWs.”

But Samer Muscati, from Human Rights Watch, said the UAE was responsible for not enforcing its laws.

“Obviously, the state has failed if this is happening on such a wide scale,” he said.

Surprisingly, the stranded workers, so desperate to leave, are equally anxious to return to the United Arab Emirates.

“We will all come back, what else can we do? We have no choice,” Mohan said, shaking his head. “There is no other work.”